My last real ride was the NI1600 and I registered with the NZ Distance Riders Club for the 1KC a while ago. My bike is about 1,700km away from its 30K service and my tires have about 3,000km left in them so I have not been out much. I had a rough route mapped out in Basecamp to give me an idea of what the route would look like and sat back to wait for the rider notes before completing my route.

On Saturday 31st I got the rider notes and used google maps to get to exact GPS coordinates. I then plugged these into my Basecamp route but things were not going well and at one stage it had me going up a road for about 20km only to turn back and come back down the same road. Could not route around the bug so went and got the latest maps from the NZ Open GPS site. This fixed all the routing issues and once I had a few shaping points in my route was exactly same distance as in the rider notes. Transferred the maps, waypoints and route to my BMW Navigator V (really just a Garmin) and it added a few kms but otherwise all good.

As the 1KC was on a day I was supposed to be working I had to ask the boss if I could take it off and he said okay. It was going to be an early start as I had a 3.5 hour ride just to get to the Tron from the Naki. Was up around midnight for a light breakfast, get the bike packed with essentials such as water and snacks and was on the road about 2:00am listening to More FM on the inbuilt bike radio. I had been feeling a bit sick for the last 5 days but decided to go anyway and see if I could ride through it. Wasn’t long before I set the cruise control and had a good ride up to Hamilton but it was cold at that time of the morning. Was 2 degrees at one point so on went the heated vest, heated seat and handle bars. My GPS route had me leaving Hamilton at 6:30am and getting back finishing at 7:00pm. It is usually pretty accurate so was expecting to be back home at about 10pm, grab some sleep then start my two night shifts the next day. 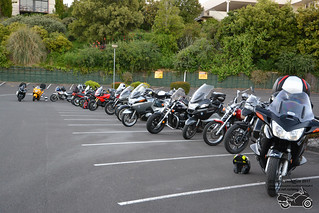 Some of the bikes lined up before the start 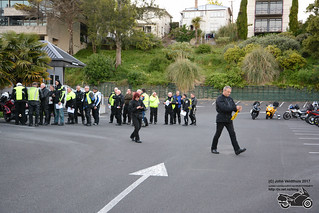 Time for the instructions

There was already plenty of bikes at the Hamilton Commerce Club when I arrived and we chatted while we waited for Jim to show up and get us under way. I managed to get away exactly at 6:30am and was soon chugging away towards Tauranga which was going to be my first fuel stop. Along the way I saw my one and only police car and the radar detector saw him way before I ever did. Checked and was only doing 105 anyway so all good. My plan was to go through the toll road to the mount and fuel up there. Seems the bastards have changed this all and where the dozens of previous times I have been through here it was free for motor bikes there is now electronic tolling and bikes were included. No where to turn around so had to take the hit. Seems hard to pay it as well so I will wait for them to send a bill. (Update. found the site and paid the $1.80. Don’t think I saved that much taking the shorter route though so never again) 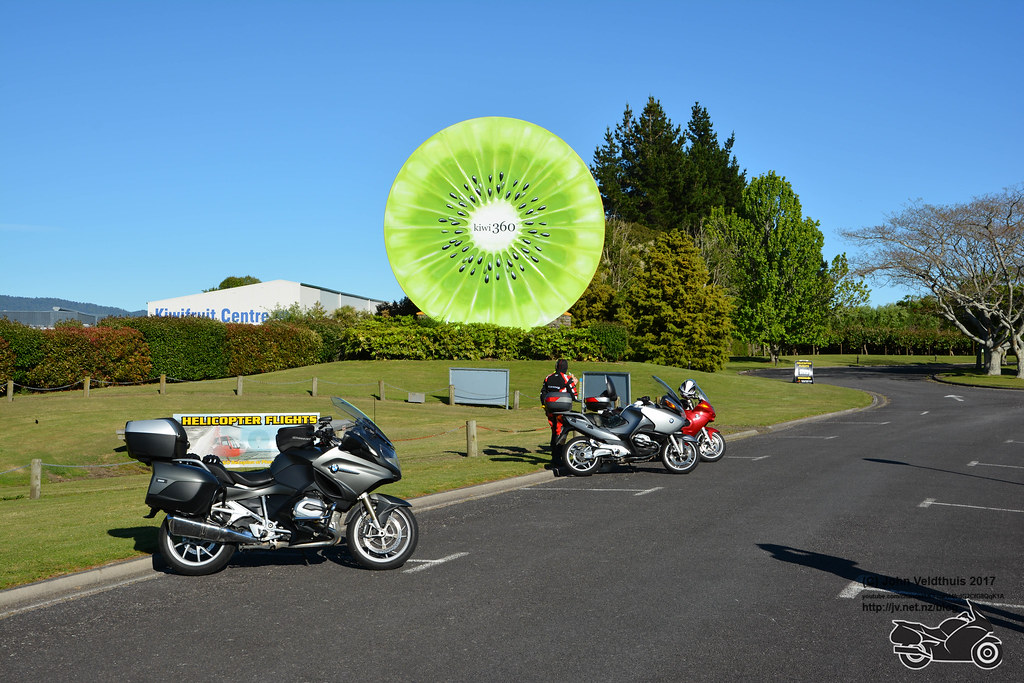 After this was soon pulling up at the Kiwi 360 to get my first photo of the big kiwifruit. Fair number of bikes here already as well. Next was to carry on past Whakatane following SH2 and then turn left onto SH35. This is where my problem started. First off as I said my tires were not in the best shape and the cornering was awful to say the best. The front had a large push in it and the back did not want to get off its flat area and tip over. The roads would have been great if I had just changed those tires. Oh well they did last, just made more work of it. 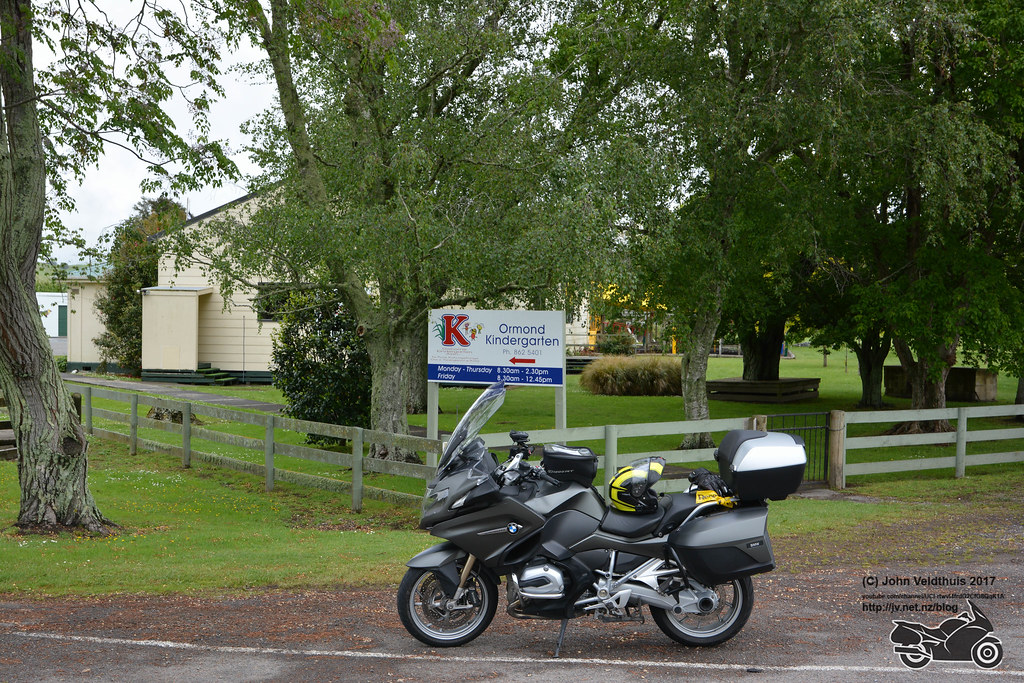 Was just following where the GPS was telling me to go and not really looking at the actual screen map so was surprised when Ormond Rural Pre-School suddenly popped into view. It was supposed to be the Mayfair Store so I took a photo of the school and then popped out my actual maps and the route on the GPS to see what it was doing. Turns out it had decided to route me around the loop in the reverse direction and I had been going down SH2 the whole time. Duh! Lesson learned, more shaping points next time. 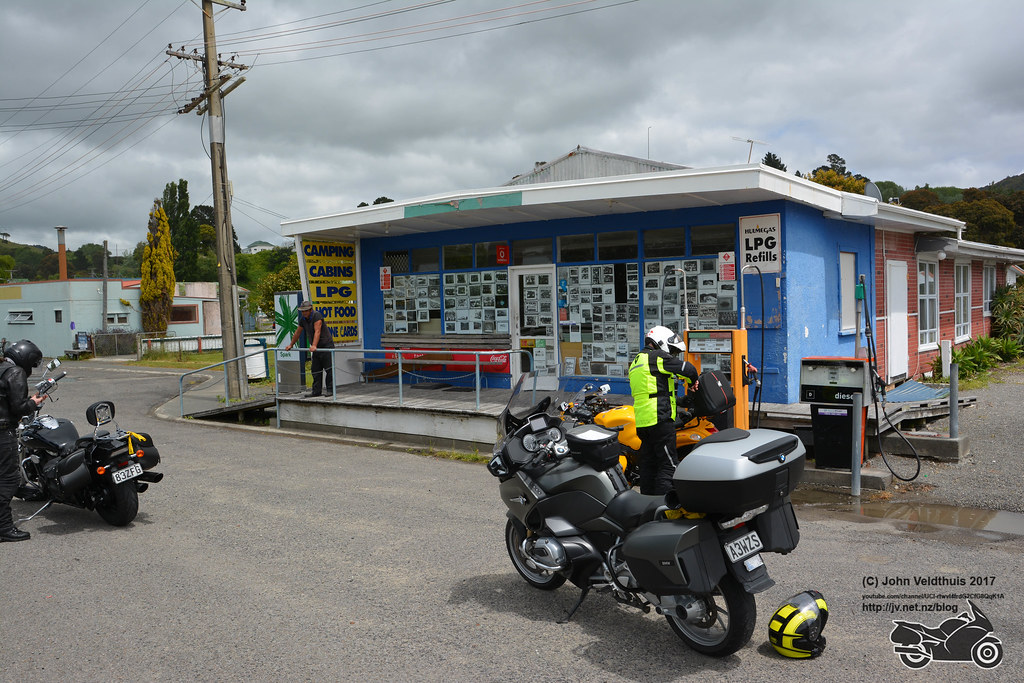 Fueled up in Gisborne and carried on to the Mayfair store. Took the photo there and carried on. The next stop was ‘The Tree” which was between lakes Rotoiti and Rotoehu. Again the GPS played up on me and some time after passing Opotiki it was telling me to turn left onto SH30 which is exactly what it should have been doing. Then all of a sudden it started telling me to do a U-turn. When I got home and checked there was a shaping point about the time it did that and it obviously didn’t detect the location as I went past. As it does not alert there was no indication on screen. Next time I will just hit by-pass waypoint button. Anyway I entered the location as Goto and was back on track. Was making reasonable time given the state of my tires and was soon at “The Tree” and photo taken. GPS was still telling me finish time of 19:03 and it stayed around 19:00 plus or minus 10 minutes the whole trip. 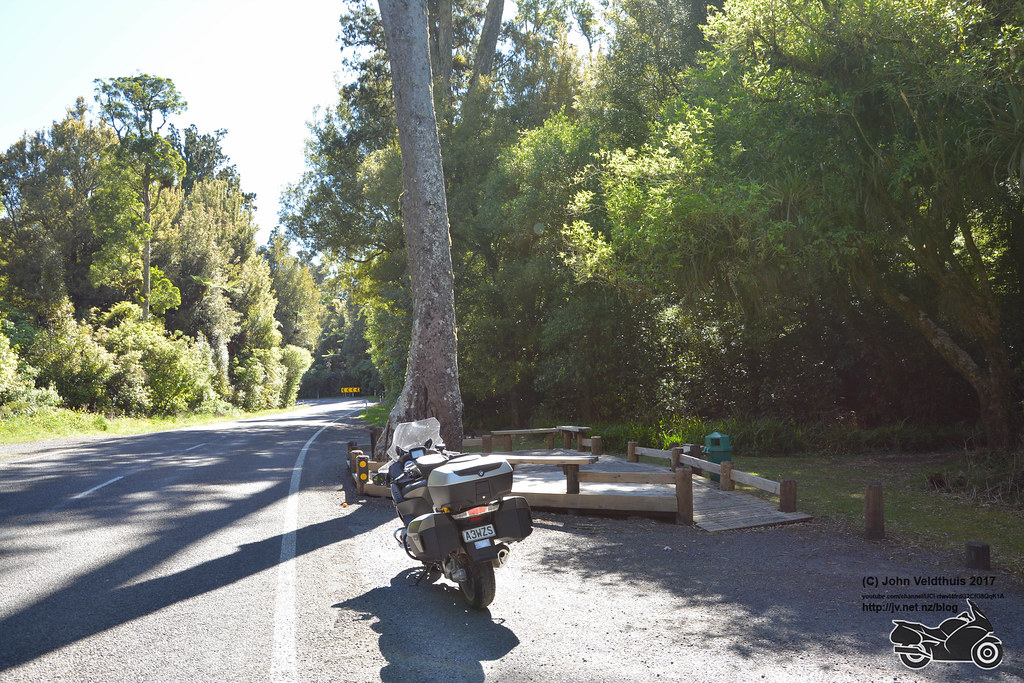 Picnic Stop by The Tree

One last photo to take at Otorohanga and it was off to finish. First though I needed some more fuel so stopped in Putaruru and filled up for the last time. Was soon at the sign and took my last photo and carried on SH39 to finish. Turned right onto Tuhikaramea road and one last obstacle to get past. Seems that they are doing some sort of road works at the road was down to one lane for a huge distance. The light was red at my end but could see the whole distance and not a car in sight. So carried on and went around the round-about that I thought was the end but still it carried on. So did I and just before the end three cars came through so I pulled out of their way and exited the one way bit.  Hate to think how long the lights would stay red for but it must have been a huge time. 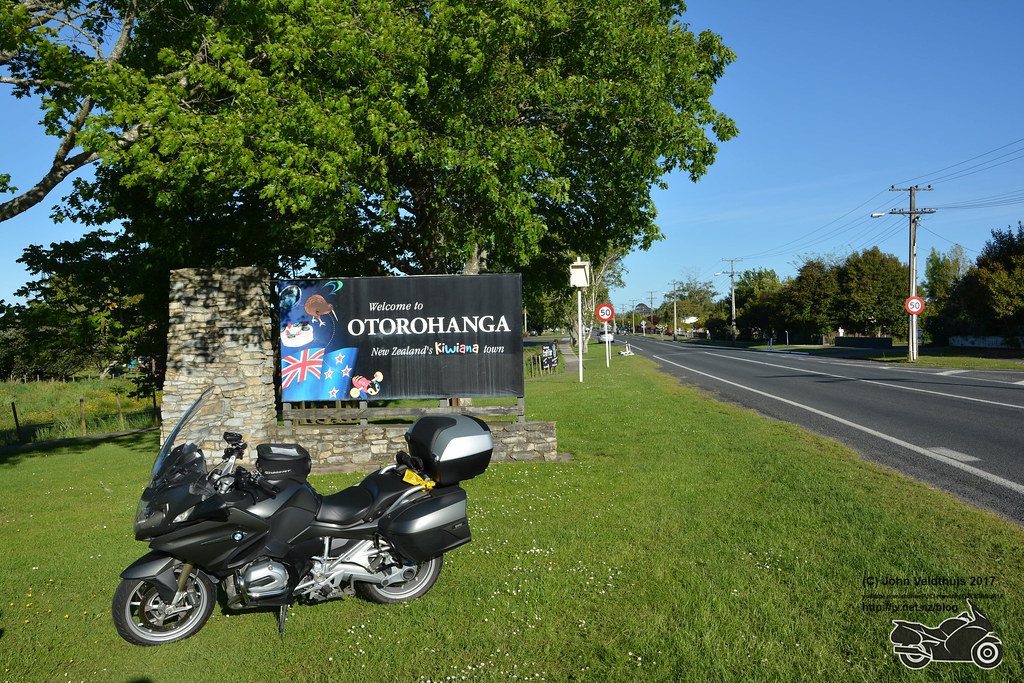 Back at the Commerce Club arriving at 18:45 and photos shown, badge and cert accepted and drink offered but I needed to get home to the Naki so left straight away. Arrived home at 22:05 and put the bike away. Clean up another day along with new tires and a service.

It was a nice ride and the weather was great. Had two little areas of drizzle around Gisborne but otherwise nothing. Wind certainly did start getting up though.