Time for a new helmet!

My current Shoei helmet is about 4 years old and has a few chips and such out of it. Have been told that they should be replaced about every 5 years and while it has not been dropped at all it has been hit with a few large stones at times. I usually wear glasses and always thought the frame on my left side was getting pushed into my ear causing pain. I have got some new contacts and was surprised when the pain was still there with no glass frames to be the cause so it was time.

I looked around and wanted a modular helmet and after a few reviews previewed I decided on the Schuberth C3 Pro classic red. On a recent trip to Auckland I went to Cycletreads who supposedly had some to try for the fit. My head was 61cm so XL should have done it and after trying on the XL and L I think that the L was too snug and would result in the same issue I have with my L Shoei.

Problem was there was only one classic helmet and even though it was in red it was only a SM size. They had some plain helmets in the XL but none appealed to me and after a phone call it turns out no more are being imported to NZ. Said thanks anyway and would get one from the USA.

Got on Revzilla and checked and their site said all out of stock for the classic. Fired off a request as to when to the new stock would arrive and got a reply saying that Schuberth no longer supplied those colors. 1st set back. I finally stumbled onto the C3 Pro Observer which had a nice yellow so ordered that plus the SRC unit for the comms and a blue tint visor. Total of about NZ$2000.

2nd setback happened and got an email reply saying Revzilla could not send Schuberth stuff to NZ due to restrictions from Schuberth. I was a bit annoyed as I would have brought it here if they supplied what I wanted. Revzilla suggested I use a firm like Myusa.com or Aramex to get it shipped to me.

I decided on the local NZ Post system called YouShop and soon had my own USA address. Went through and redid the order using my new address and got the confirmation of the order and now just need to wait for it to ship to my USA address so I can pay the freight cost over here. I bet it is going to be more expensive than Revzilla could have shipped it for but at least I will now get what I want. And of course the goverment is going to take their share of the cake once it hots the border with GST, inspection, and other charges they can think of. 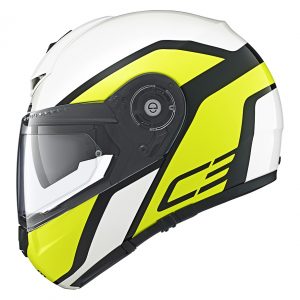