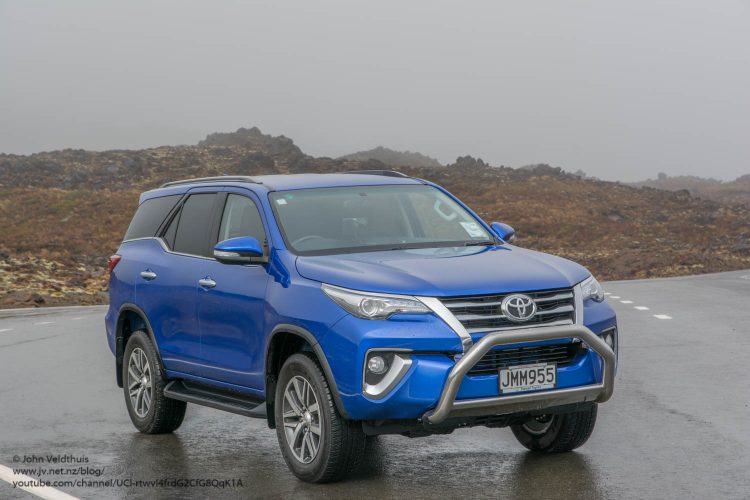 I had my latest car for over 10 years now and that is the longest time I have ever held onto a car. It was a Toyota Highlander and was purchased as a demonstrator model so was significantly cheaper than the full priced version and only had 5,000km on it when I purchased it.

But 195,000km was now on the clock and 10 years old I started looking for a new car. It had to have 4-wheel drive and plenty of fancy gadgets in the cab. Also had to have reasonable fuel economy. I tow a jetski as times and also a quad bike so needed to have good towing.

I really wanted a new Highlander but way to expensive and I saw that Toyota had an updated version of the Fortuner. It is based on the HiLux chassis and they are nearly identical twins in the front when you look at them. It had the 4-wheel drive but it also had 2-wheel drive and also had a low 4-wheel drive mode. It had a six speed auto transmission with paddles on the steering wheel. It had more gadgets in it than you can shake a stick at and tells you all sorts of interesting facts. It has a Eco mode along with a normal and power mode.

I took the BMW to New Plymouth and outside Tasman Toyota was a nice Blue Fortuner. The retail price on these is normally $79,995 for the top model which has everything. They were doing a field days special of $69,995. On top of these the very machine they had there they were selling as a demonstrator for $63,995. All my Christmas’s had come at once and I basically said I would take it based on a test drive which would be four days later.

I took my Highlander in to be serviced on the Friday and Glenn took me for a ride around the block. He then handed it over to me and suggested some roads to try it on. However, I wanted a good decent test and asked if I could take it to Mount Messenger. He said normally he wouldn’t allow it but he could see I was very interested and said okay.

The Fortuner is powered by a 2.8 litre, turbo charged diesel motor. I could tell instantly that it was down on power as compared to the Highlander but not by that much. This meant acceleration so slower. However, the torque was much higher and it held its speed much better on the hills and would be good for towing. Fuel economy was rated 8.7l per 100km. On the way to and up the hill it hit that exactly and on the way back did 8.2 so very good. The cruise control was excellent and no sudden downshifts like the Highlander likes to do. Not only that it down shifted going down the hills to avoid going too far over the set speed. Something the Highlander never did.

By the time I got back I was in love with it. The ride was extremely nice and so much better than the Highlander and it was very quiet inside. Had to constantly watch the speedo so I did not go over the speed limit.

The only thing that disappointed me on this short trip was the navigation software. First off there is no actual speed indicator like normal ones have. I assume this is so you can’t see how far the speedo is off, if any. Second part of it is that map updates cost $200 a time so I guess I won’t be updating it any time soon. Come on Toyota get it togeather. Other manufacturers have life time free maps. I will be putting my Garmin on the windscreen and using the free updates on that. Third part was the audio system. It is very comprehensive system and I plugged in a USB stick. It picked up the songs on it and started playing them. Could play by Album, Artist, Folder, Genre and maybe a couple more. However nowhere could I find an option to play a playlist. I find it hard to believe that they did not include that but I could not find it. I have sent off an email to Toyota NZ asking them about it.

I did the deal when I got back and organised the finance over five years. Got them to add a tow bar and a front nudge bar and it will be ready to pick up mid-week on about the 22nd June. Sold the Highlander and now have no car at all for about a week so will have to use my mum’s car or the BMW. Will have to catch a bus to New Plymouth to get it once it is ready. Insurance all done.

It was going to be a week before it was ready so on Monday 20th I popped up to pay the $7,000 cash I had and to set up some stuff on the Satnav, Bluetooth and Audio. I set the radio stations I wanted no problem. Then moved on the satnav and tried to set the home location. This was more complicated than I thought but eventually I found the modes I wanted. Next was the Bluetooth. This system was supposed to be able to download contacts, history, and also handle the messaging on the screen. Linked my phone to it and contacts and history downloaded fine in very short time. Clicked on the messaging button and it asked if I wanted to set it up so I said yes. Not much seemed to happen and each time I clicked on the messaging button it again asked if I wanted to set it up. Asked the dealer when I handed the key unit back and he said I needed to enable notifications in the Bluetooth menu on my phone. Might read that chapter in the book again and see. I enabled it on my phone anyway so hopefully next time it will work.

On my test drive I found I was looking through a sensor grid on the windscreen. Being tall I usually end up looking through the top of the windscreen. It was noticeable but not really bad. However, while I was sitting in the car I tried all the seat buttons and found suddenly I was sinking into the floor. Seems some short people must have driven it and it was raised all the way up. It had a rather large range of lift and once it was back down on the floor I found the view much better. Only thing missing is a lumbar adjustment like the Highlander had. Come on Friday! Four days to go.

The big day is here and 2 hours by bus to pick it up. After the handover I went for a trip to Taumaranui, Whakapapa Ski field, Wanganui, then home. The weather was rainy so it got very dirty. The drive itself was good and the GPS was excellent except for the cost of updates and lack of speed indication. My other GPS indicated that the speedo is 5% high. I played with nearly all the things and when I stopped to take the photos noticed that one fog light was not working. Turned out they did not put the plug back in properly when they put the nudge bar on. Easy fix.

The USB MP3 player is a let-down as it will not play playlists and after several emails to Toyota I don’t think they know anything about it. I don’t use it much but it would have been nice. Fuel consumption over the trip was 9.1 l/100km so not bad. Power is certainly down as compared to the Highlander and some over takes need to be planned. However, torque was good and very little speed drop on the hills.

Now some photos to view it.

1 thought on “Time for a new Cage – Toyota Fortuner”