I have been on a spending spree on Farkles for the bike in the last month. First heated gear, then LED lights and now finally my latest purchase. Sheepskin seat covers.

I saw a post on Facebook a while ago on the Distance Riders page with a guy putting sheepskin seat covers on. They looked very nice and looked to be very comfortable. I decided to splash out with some of my last season’s overtime cash and found it would cost me $260 to get both covered. I arranged to go up and get a pattern made, then go for a ride while they made them up. However, I had to go up to Tauranga to service the bike and they finished at 11am so emailed and asked if I could stop off on the way home. Shortly after I was at the shop on SH1 8km south of Putararu and Linda was making a pattern of my seat. They had patterns for a fair number of bikes already but not mine so it took 30 minutes to make one up. As it was raining and windy I decided to get them to courier it down to me for an extra $10 and was on my way home.

The covers arrived a few days later and I put the rear one on. It fitted like a glove and had not trouble getting the seat back on. The front slid on with ease as well and while it covered everything I thought it was a little short down one side and did not wrap up inside like the rear. An email about this to Linda said to pop in next time I was passing and she would fix it up. Had a bit of trouble getting the seat back on and it would not lock down. Must have been the extra thickness of the wool against the back seat but eventually I got it seated okay.

So now to test it. I decided to go for a short hop around Egmont but had to fill up with gas first. Soon one my way but just after Stratford it started spitting and it looked really bad up ahead. Seeing as I did not want to get the covers wet on my first outing and more importantly my rain suit was still at home after a clean and dry I turned around and took the dry way home stopping off for a photo.

The short time I was on it I think it will be really nice. I was not sliding around on the wool at all and it was very comfortable. I tried a gel seat cover once or twice and used to slide around on it. The wool covers where so much better and no sliding. So all set now for the long distance rides coming up. These are the North Island 1600, the 1KC Hamilton and of course the TT2000 in February 2017.

Next review will be the heated gear which has finally arrived. Pics below of the seat covers. 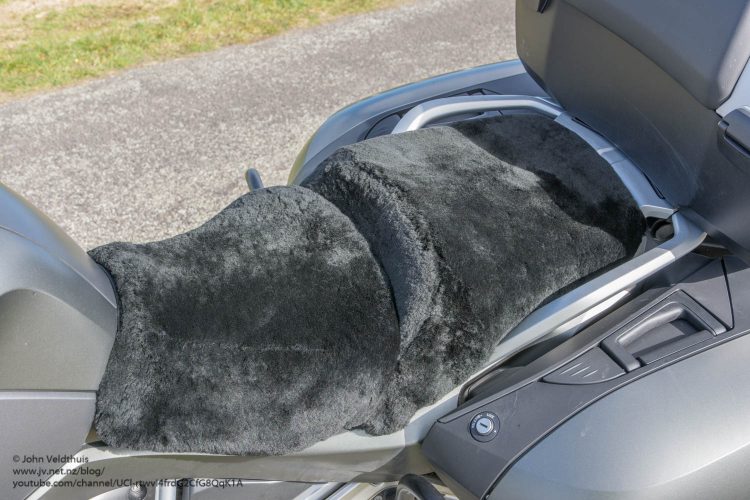