I decided that I wanted to do the NI800. I could not do it at the time due to doing the NI1600 which ran at the same time. I asked for the route just to buzz it off at my leisure. John sent me the route, the briefing, and an offer of a pin if I managed to get it done.

My first attempt failed badly with me having a cold. I thought I had got over it but after leaving home and only getting 15kms at 4am I decided the time was not right and went home back to bed.

Second attempt was better but not great either. On Saturday, 15th April I departed at 3:30am. The weather forecast was for some showers but mostly fine (yeah right). The road was wet most of the time and I stopped in Wanganui to fill up the tank. 5kms from National Park the heavens opened up and I increased speed to get to the cover of the fuel station at National Park. I stopped and considered the ride and after ½ hour of the rain not letting up decided to give it a miss. I put the rain suit on and mounted the BMW for the ride home and got 2kms as the sun came up. The rain mostly stopped and the clouds parted to the east so thought I may as well see what Turangi was like. Going over the big hill I crested a rise and a corner and must have hit a nice big tar patch as the bike went sliding to the right. It was one of the biggest slides I have had on the bike and as the tires re-gripped the bike gave a big shimmy and it was over and so was I, on the wrong side of the road. I am glad no one was coming the other way. The roads were is shocking state as far as tar strips go in many places but with the sun coming up it was easier to spot and only had 3 more small wriggles. 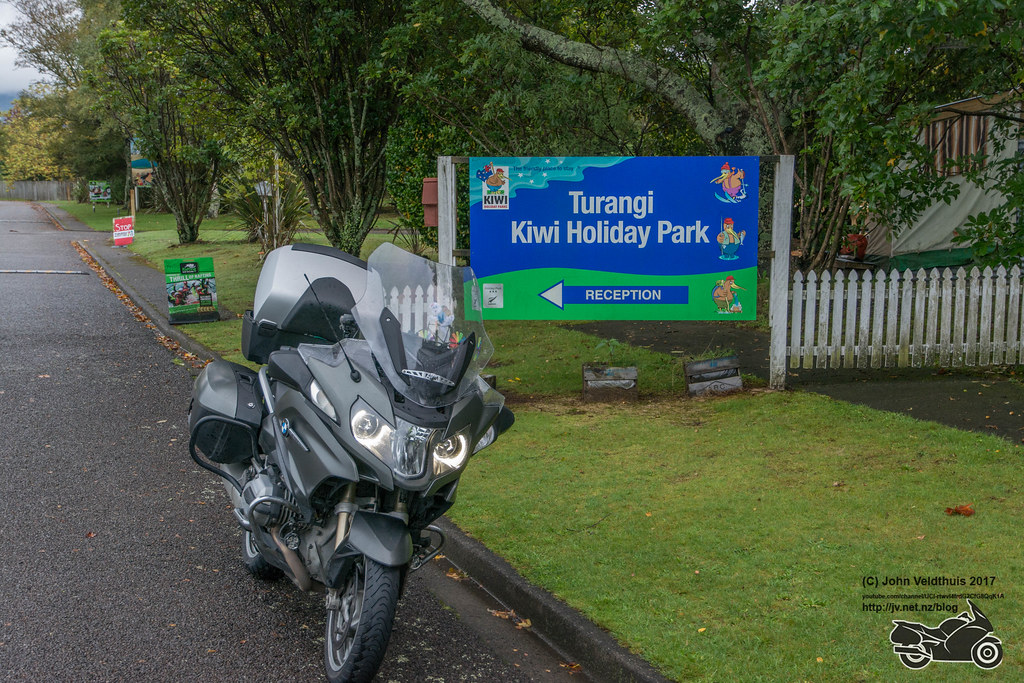 The Place it begins 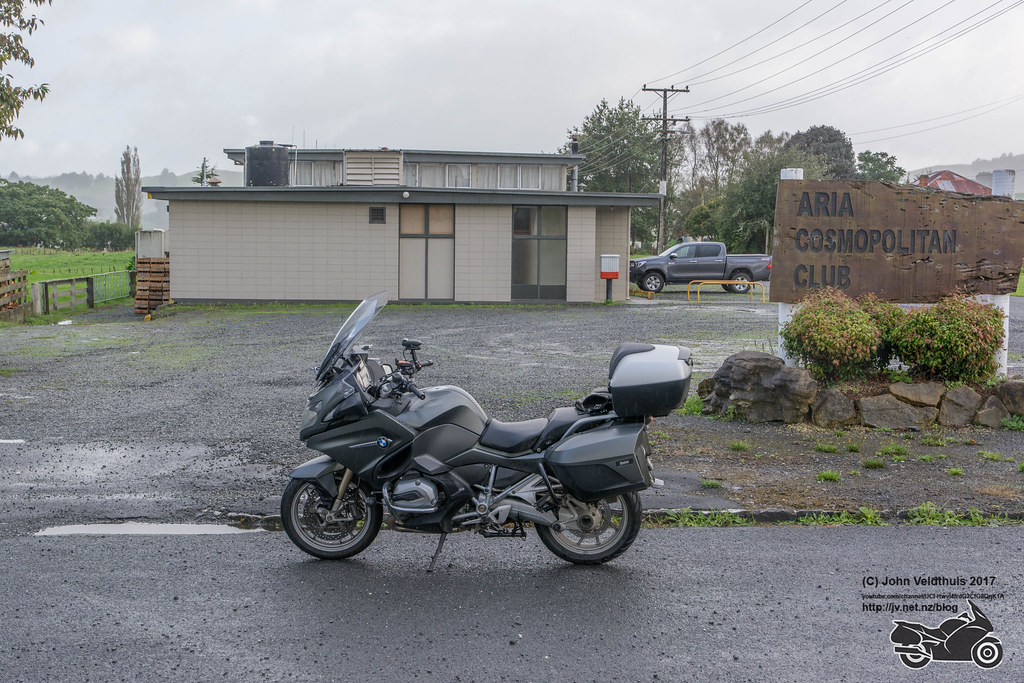 Arrived at Turangi start point and weather started to look okay so said “what the hell” and started my trip at 7am with the GPS saying I would be back at 16:30. I still had the rain suit on so it wouldn’t rain and headed off for the first checkpoint at Aria. Turning off SH4 to Aria the road got narrow and very slippery due to masses of leaves on the road. Took the photo of the cosy club and headed for the next stop at Kinihaku. 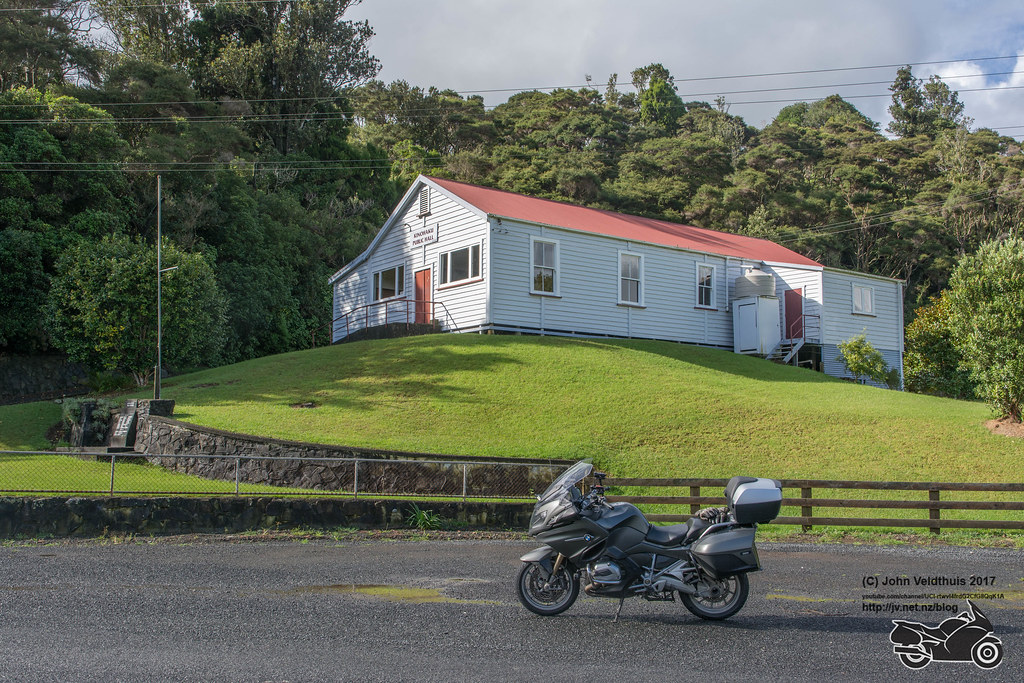 This took me out to Poipoi and the GPS wanted me to go straight through and around but I wanted to refuel at Te-Kuiti. I did this and carried on, turning off at Waitomo to head around to the coast. This road was very slippery and I lost quite a bit of the time and ended up with arrival at 16:50. Took the picture and headed for the next stop at Te Kauwhata. 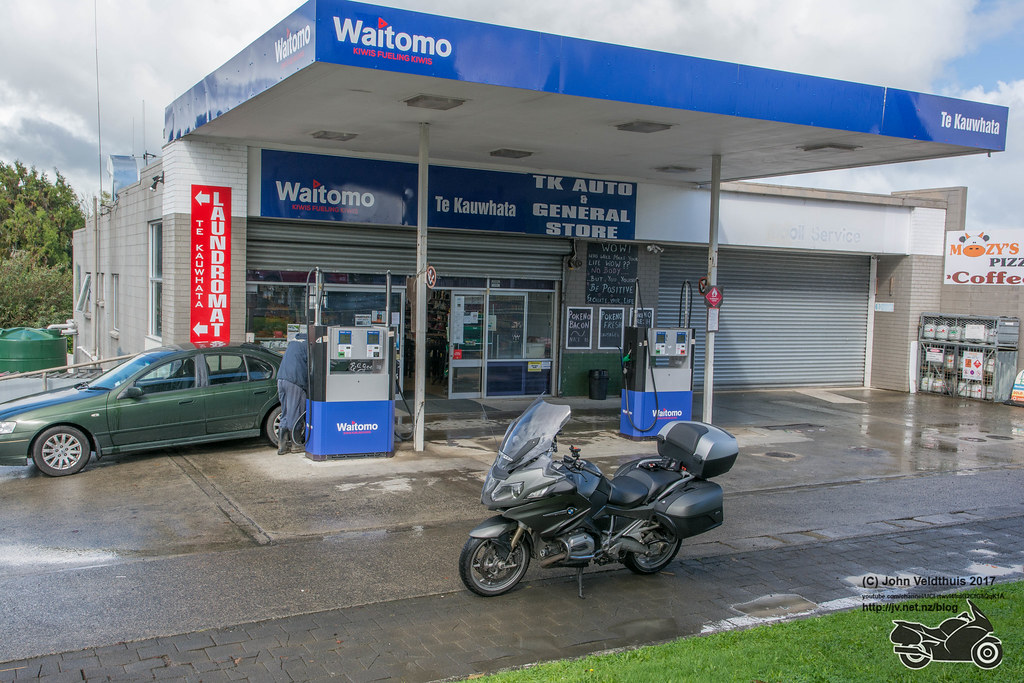 This was a nice straight run up to Hamilton and then onto the express way and up. In Huntly there was a big tail back of cars doing about 2kph and having the nice thin bike I cruised up the side to find an accident just before the expressway restarted. Got through reasonably fast and the tailback on the expressway going the other way was massive. Many holiday makers getting delayed.

Photo taken and it was off to the next stop at Paeroa. 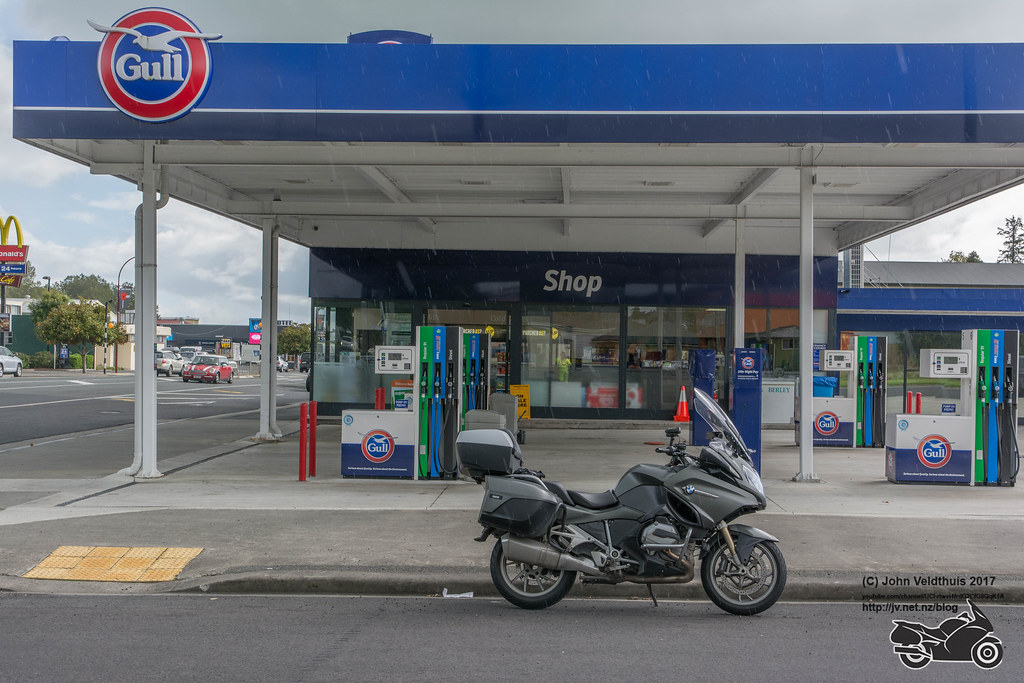 4th Checkpoint over on the east coast – Paeroa 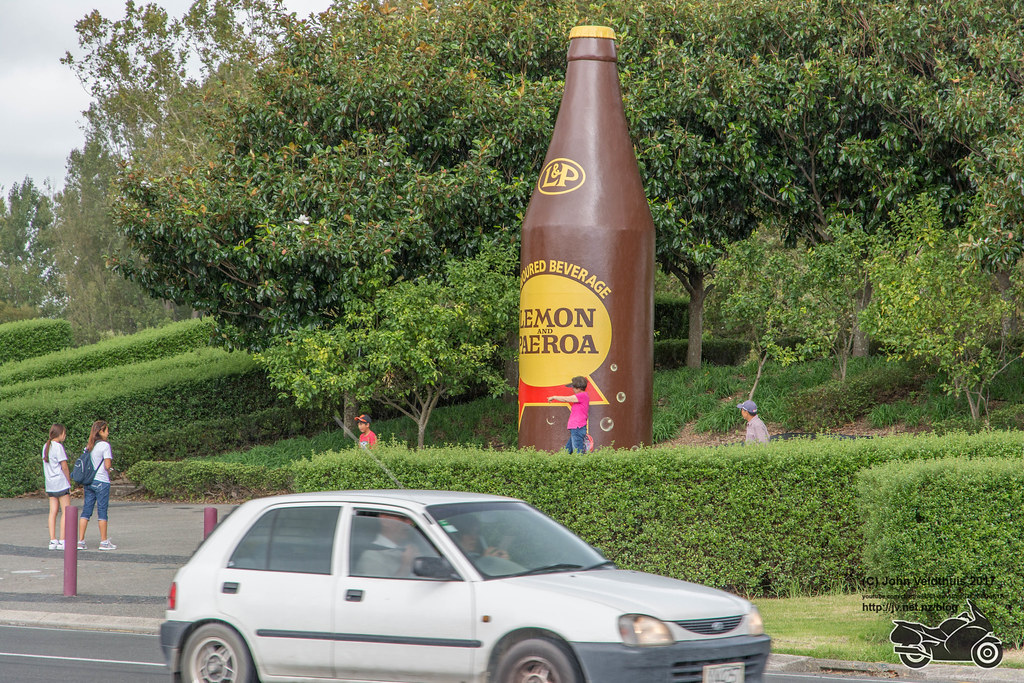 Hard to drink all that – The Bottle

No real issues getting there but the 90kph speed limits hampered by idiots only doing 70kph and many k’s of yellow lines meant a slow trip. The photo at Paeroa threw me until I remembered what John said in the email. Originally the stop was at a Mobil station but it is now a Gull station. He said they changed it to the Z station down the road but I forgot that bit and took the photo at the Gull station. Took a photo of the bottle as well. 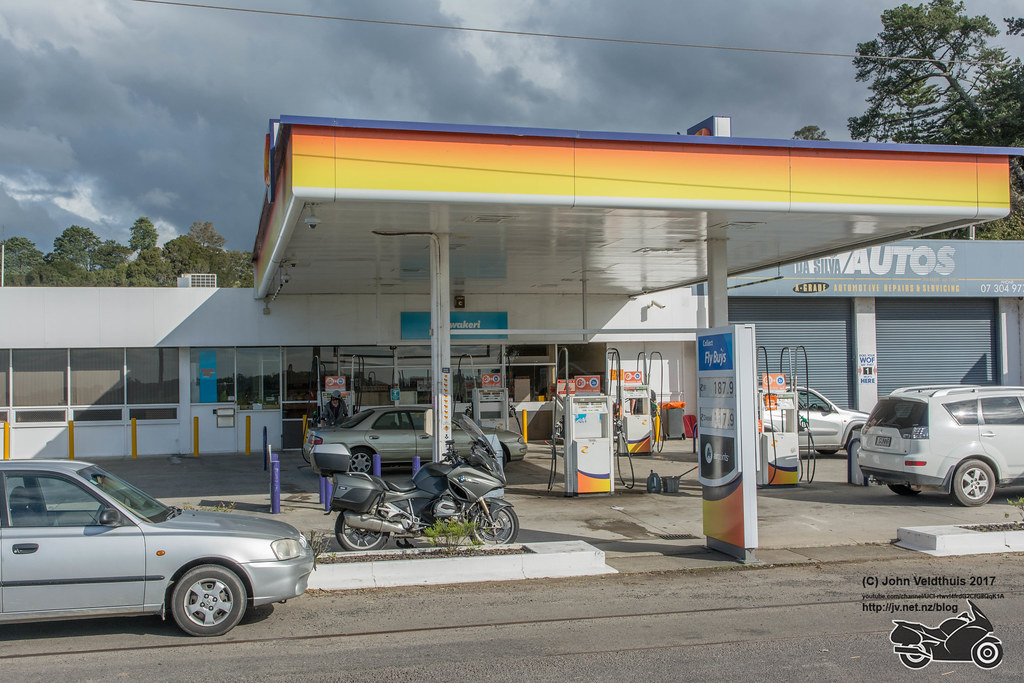 5th Checkpoint. Getting hard to find with the road closures – Awakeri

Next stop was Awakeri but first a stop in Tauranga for some fuel. Just after Waihi the traffic got really bad and was travelling at about 5kph and the line seemed never ending. I managed to go down the outside of most of them but got pushed over the yellow line a few times as I managed 40kph. Not sure what the issue was because magically just before Tauranga the traffic just cleared. Most likely just too many JAFA’s trying to get away. Refuelled and decided to use the toll road as I was still running behind the 16:30 finish time my GPS wanted.

Things got interesting from here. I knew that Edgecombe had road closed but that they were letting people back in so when I got to SH2 where I could have turned off and gone down the coast I carried on. I had assumed there would have been a note saying road closed ahead. The GPS said 18km to Awakeri at this point. However the road was closed further up and I had to head towards Rotorua and then back around. What would have been a 8km trip added an extra 26km. 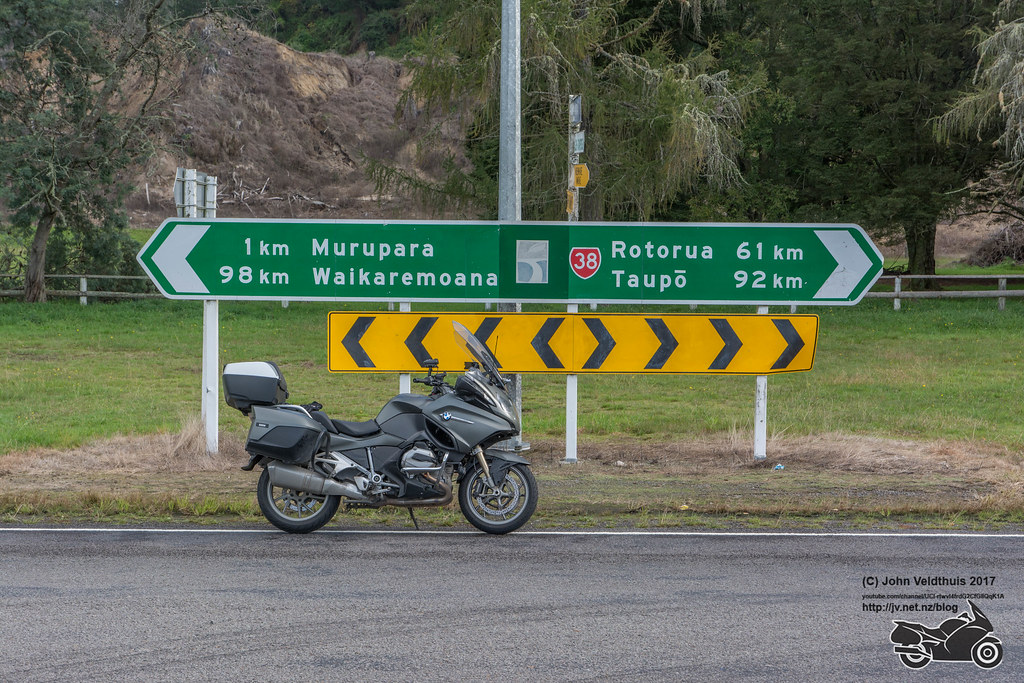 Last one and really hard to find with many roads closed.

Finally arrived and took the photo and as I was packing up some guy asked me what I was doing. I showed him my map and my next stop of Kopuriki Road. He then said I may not get there as the road over the dam was probably closed. Told me to take the turn onto TeHuna road in a small town ship. Said he was a tanker driver. He was right and I soon came up on the road closed sign so went off the side road back to the main road. The GPS routed me through TeHuna road so was doing its job nicely. Got back onto the road I needed after a while and followed this for some time. Then came to a turn and the GPS said straight ahead. Took that but only got 30 meters and saw the gravel road and said no thanks. Went back to the other road and followed this some more and it then told me to turn right up ahead. Did this and yep you probably guessed it, road closed up ahead. Getting a bit frustrated at this point I thought one more and I will give up. I was not really sure exactly where I was and was going to stop at the next intersection and check Google Maps. Well the next intersection was a state highway but to get to it I had to cross a big flooded road. A farmer was pumping out his yard and pumping the water onto the road and it was about 6inches deep in the middle.

Around the corner was the last check point and I took a photo of the road signs. Again while I was packing up a car stopped and asked me if I knew the roads around this part. Told them where I had come from and they said that’s where they wanted to get to so I explained to them the route I took to get to this point. It was much easier with the GPS telling me where to go.

Final check point done and it was time to head off to Turangi. The GPS wanted to save me 10 minutes by taking me through the forest but it was closed even if I had wanted to. Made good time back to Turangi with only a few heavy showers and arrived at 17:30 having lost over 60 minutes to slippery roads, slow traffic, and many closed roads. Took the final photo of my speedo and went and had a meal at Burger King, refuelled the bike for the trip home and headed off for the Parapara’s. Arrived home at 21:00 and put the bike away to be cleaned another day. 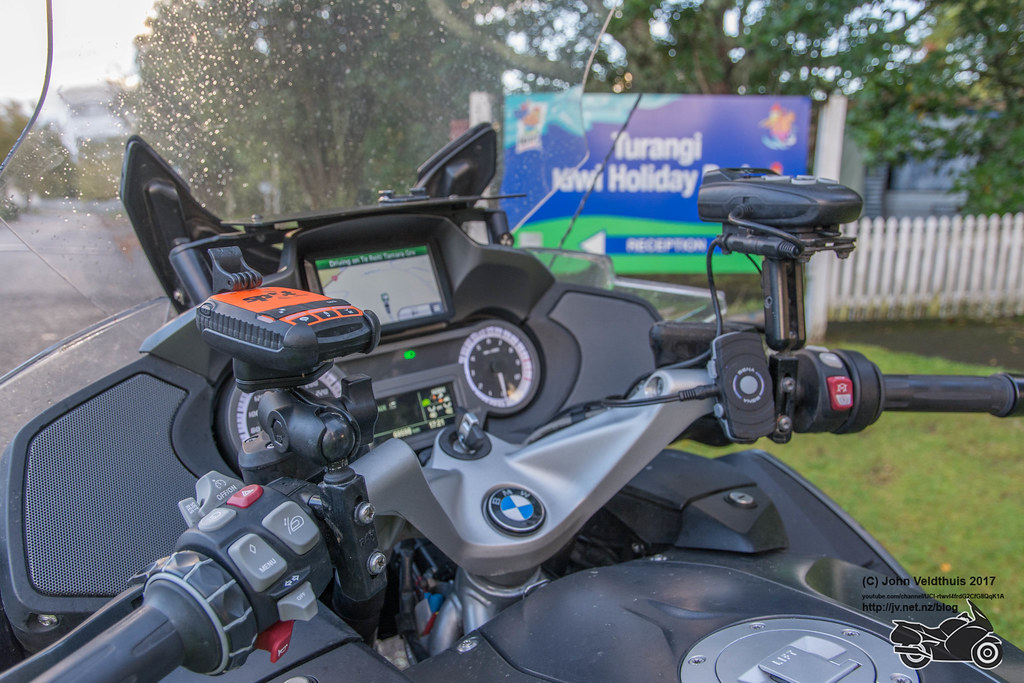 The weather over the trip was not kind. When I had the rain suit on it was mostly okay but a few times I took it off. Once there was a massive downpour which ran down my arms and filled my gloves with water. I moved to my summer gloves after that which dry out much faster.

Spot track log is here. It appears to have missed a few recordings. Missed the start due to pushing wrong button in the dark