“You will be given a route of approx. 1000 kms of North Island roads selected for their good riding, great scenery and points of interest along the way.  Every hour or so, you will need to stop and find the answer to a question.  The 2018 Odyssey will take you through Auckland and Northland, starting in Central Auckland, visiting Cape Reinga and finishing at the iconic Puhoi Pub”

I registered for the Northern Odyssey as soon as it was out and the instructions arrived on the 14th December. I then spent two nights with Basecamp and Google Maps carefully plotting out each GPS co-ordinate for each of the 38 questions. There was only two that I was unsure of and they were very close togeather so obviously one was wrong. Should be able to pick it up along the way.

The route was about 1200 kms with 3 ferry crossings or longer if you don’t take the ferry. This means a minimum of two days. I had to go to Auckland on the 27th December so decided to get the first 6 questions done while I was there. I left home at 3:30am and of course it was raining again. Decided to see what it was like in Stratford as I had to refill there. The stars were out so carried on only a little damp. The trip up to Auckland was nothing special and a refill in Hamilton to avoid that expensive Auckland fuel saw me right until the return and Mercer. 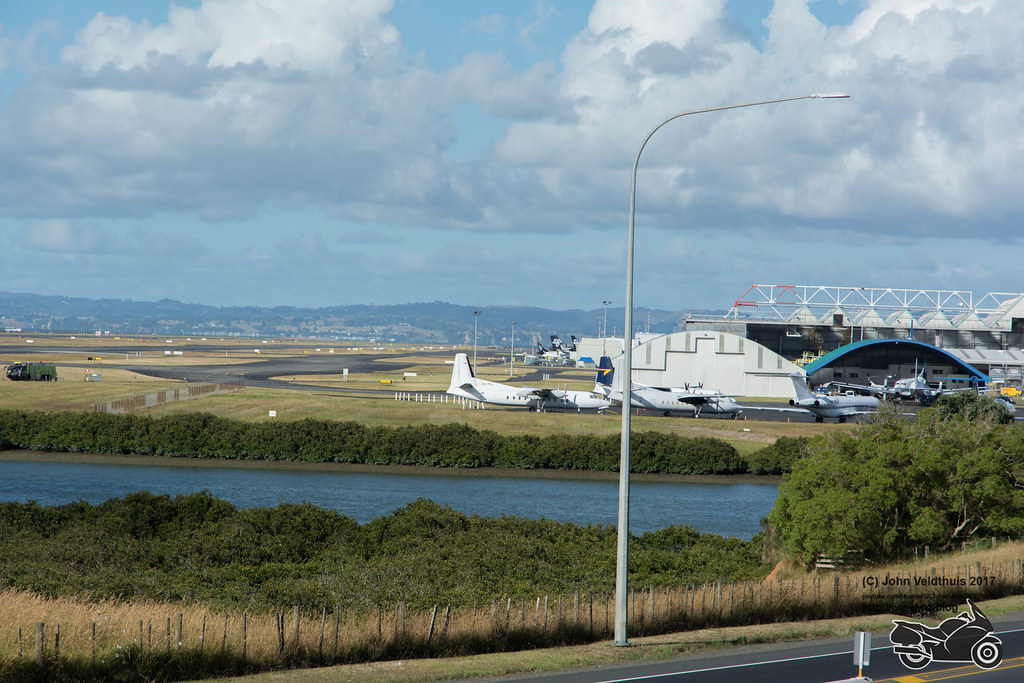 Runway from the East side

Next stop was one tree hill that has no tree. This was the first time I had been up there, and the view was awesome. Found the answer and again took some snaps. 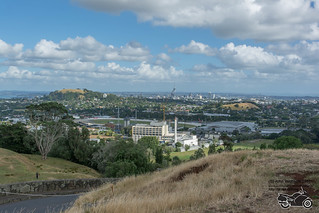 Looking North from One Tree Hill 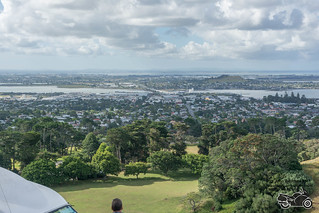 Looking South from One Tree Hill

Crystal Mountain was the next stop and there was an error in the directions, but I had the GPS directing me so no foul. Soon found the answer and took another snap. 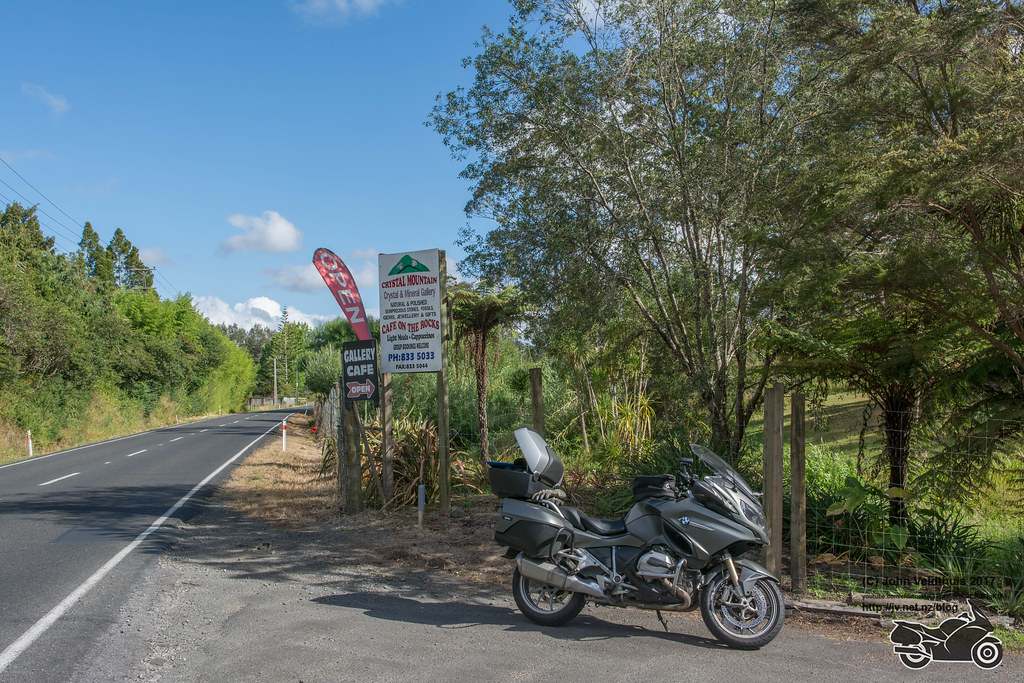 Arataki Visitor Centre was the 4th question and was soon looking around for the trough and answering the question. More snaps and a good look around here. 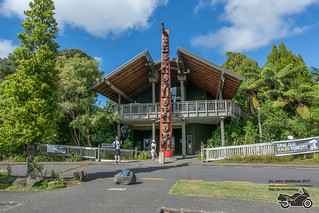 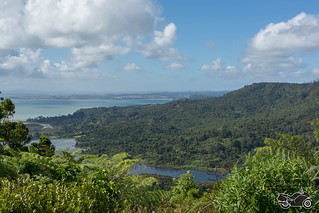 Next on the list was Piha. The road to Piha is not that great and I am surprised that the JAFA’s can stay on it at all. However, many were heading off down there doing 30kph in a 70kph zone and not one pulled over in the slow lanes to let anyone pass. Finally made it down there with a final turn that nearly had to be a two point turn to get around it was that sharp. Found the answer and a few snaps. I was going to get some snaps going back up the hill, but all the parks were taken up and no room to pull over to do it. 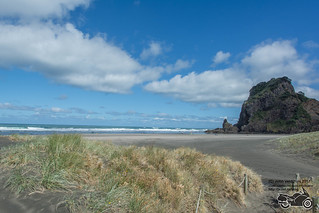 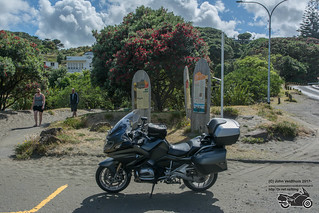 Notices on the boards at Piha

Next and finally for this trip was Muriwai. Directions said to follow Scenic Drive, but I could not see what was scenic about it. Just trees and bushes lining the road. My GPS deviated from the written directions at some point, but I had faith (and no gravel roads this time) and I eventually arrived at the beach. Again, JAFA’s heading for this beach as well. I am sure none of them can drive over 50kph. Found the answer to question 6 and took some more snaps and headed back for Auckland. 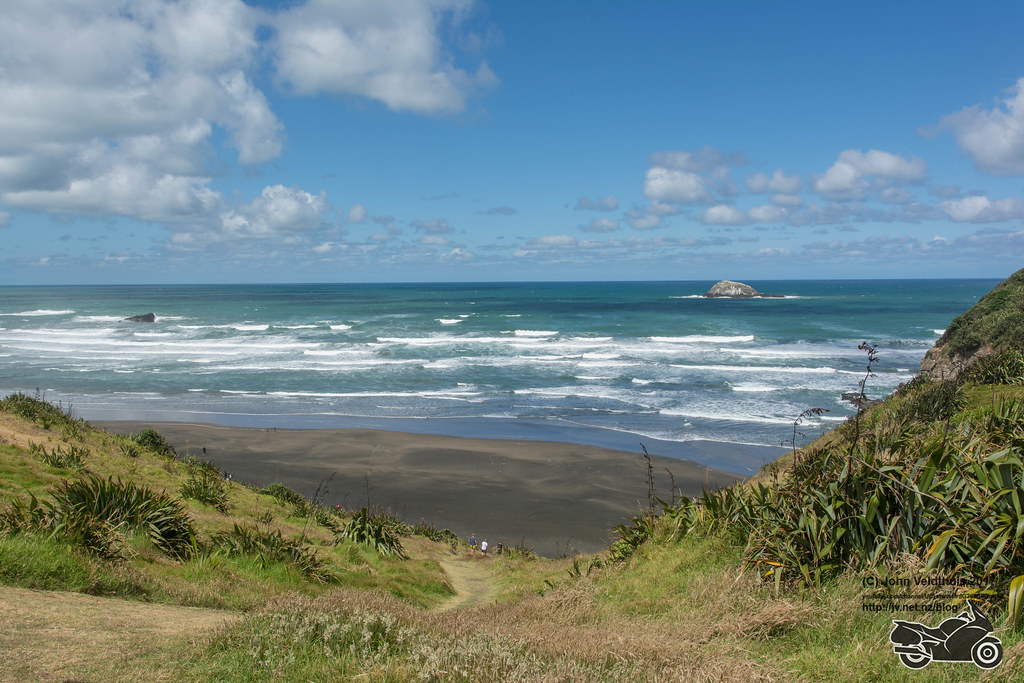 Muriwai Beach. Not many swimming as yet

Traffic going back into Auckland was bad and I had to sneak down the inside lane to reach my turnoff without taking 2 hours. I went for a new visor for my helmet and the sods didn’t have any. That was a waste. Said they could have them by February. Yeah right! Oh well might as well go home. It was 12pm by this stage and traffic was a killer. Two lanes shut on the bridge didn’t help. Filtered and finally got moving again but not for long. It appears every man and his dog were heading for SH2 and the tail backs were horrendous. I had to filter nearly all the way to the Bombay hills. During one part of this I passed and old dude towing a trailer. I had just got past him and the car to the right in front of me moved over so I could not get past him. I basically stopped where I was and the dude with the trailer decided he could get back past and when the trailer came along side it hit my bike in the back and nearly dragged me down to the road. I managed to free it nearly hitting the poor dude to the right of me but by then the old dude had just carried on and no way to get back to him. I pulled off the motorway to check the damage at the first off ramp but surprised to see he must have hit my panier protector. It was bent forward a bit and some black paint scrapped off. Pushed it back into place with my knee and when I got home I cleaned and painted the bar with some black paint. Good as new. Another tailback was at Hampton Downs due to more roadworks and traffic was heavy most of the way.

The next part is down for 3rd January at present and finish it off with a two day stint.