It has been just on three weeks since my failed attempt at the North Island 1600 ride due to weather and a sore rib. In that time the rib is a lot better but still giving the odd twinge when I pull stuff towards me, so I am hoping that it will not hinder this ride. 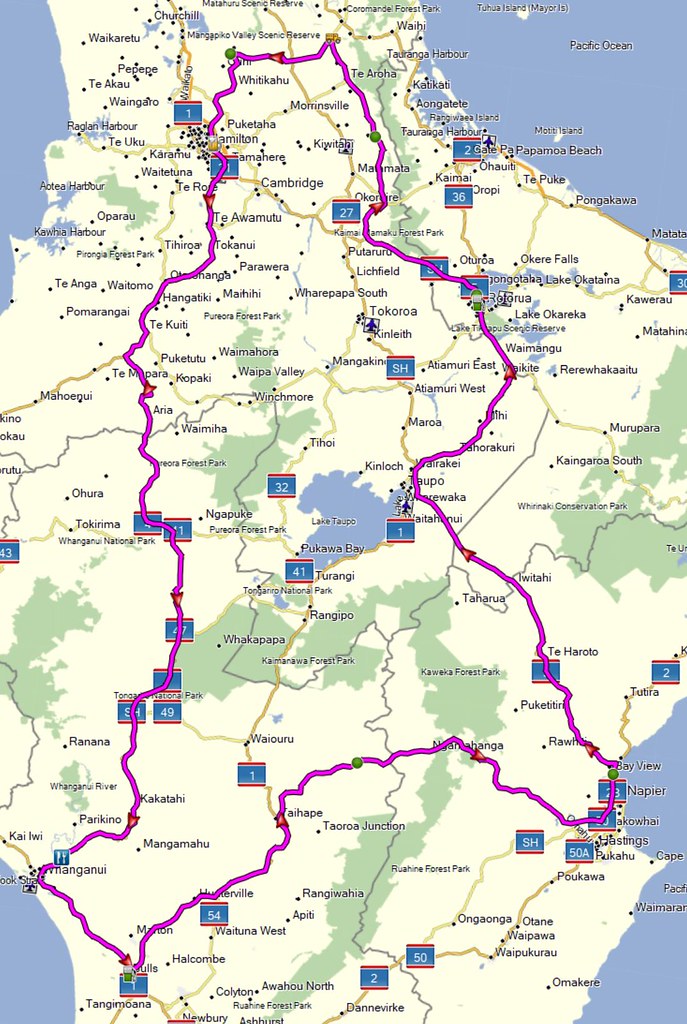 Map of the Route I will take

The ride itself is on the 4th of November departing Hamilton any time between 6am and 7am. The map is below and shows it to be a rather big loop. Preparation for me was to insert the photo stops into the GPS and get a route that worked. Had a bit of trouble finding the exact location of the Kaimai memorial but google maps soon found it and the route was set and transferred into the GPS and checked to make sure it looked the same as the Basecamp one. All good so far. Theoretically I could have done this ride on one refuel with careful use of the throttle but decided on three as to get the best value for $$$$.

We are now 4 days out from the ride and the weather is not looking too good according to the forecast. Showers around most of the ride with rain around Rotorua and above. Hope they get this one wrong as had enough rain during the NI1600.

The 4th of November came around and for me it was a work day so had to take a couple of days leave from work. The day started at 1am as I got up and got ready for the ride. Leaving home at 2am for the three-hour ride from home to Hamilton. That would give me 30 minutes to refuel and any delays along the way. The weather looked good as the near full moon out and only a few fluffy white clouds out. However, within 10kms of leaving the drizzle started so I thought I would stop and put my rain suit on early. Popped the kickstand out, which killed the engine, leaving me with some light to get changed by. Wasn’t long and hopped back on to be greeted by a battery symbol and a red flashing triangle on the dash. Never ever seen that before. The manual warns of dire happenings with this such as no ABS, traction control, etc. I started the bike and it did not sound like the battery was flat. Started off slowly fearing my ride was over already but with 4 minutes it went out and never saw it again. Hope it was just because the bike sat in the shed for 2 weeks and was just down on some volts. The rain stayed with me the whole way and by the time I arrived I was starting to get wet through my suit (time for a new one).

Arrived at the departure point of the Ruakura Campus Club and checked in and got my tag for the trip. I was going to time lapse the trip using my GoPro Hero3 black connected to a small battery, but the rain made that impossible without getting everything saturated. The GPS was telling me that it should take me 10 hours and 50 minutes, but this was without the photo stops. I did plan in two of the fuel stops. Departed the club at 6am heading for the first stop of Upokongaro Pub. GPS said I should be back at 5pm. I decided (as did the GPS) to take the main road rather than the bypass as there should not be much traffic at this time of the morning. The route was down SH3 to Te Kuiti then a left onto SH4 and that all the way down to Upok passing through the Parapara’s. The rain continued and by Te Kuiti decided that if it was still raining at Wanganui then I would turn right and go home as I was really getting wet now and my second set of gloves was already soaked. Just outside of Te Kuiti just after the big hills I saw the first of about 20 cops. He had some poor unfortunate bike pulled over who probably went a bit fast down the hill. Parapara’s was a blast as usual and bugger me just before the end the sun came out. Took the photo of the first checkpoint at the Avoca pub in Upokongaro and hooked up the hero 3 and started the time lapse.

Next stop was Bulls Mobil where I can get 20 cents off per litre and then the Memorial in Bulls which was just around the corner. No issues except for dropping my only dry glove after filling up. Dropped it right where all the big trucks could run it over but a kind sole behind me kicked it to the gutter to save it. Next up to Taihape to hang a right onto the Gentle Annie. The Taihape to Napier was in reasonable condition although there was a bit of rain at times it was a real issue. Check point 3 came up quickly which was the suspension bridge. There were a couple of others here before me with one going down to have a look at the river. Grabbed the photo and had a quick snack on 1/3 of a morro bar. 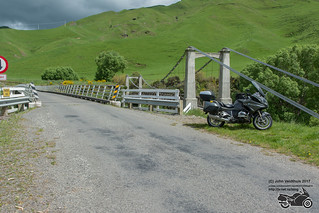 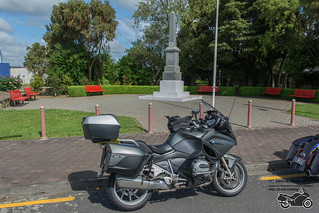 Carried on and next stop was Bayview in Napier. Weather over in Napier was awesome and 28 degrees so was starting to get a bit warm so turned off the seat heater which was drying my bum and handlebar heaters which was doing the same for my gloves. Not much action along the way but more police out in numbers. 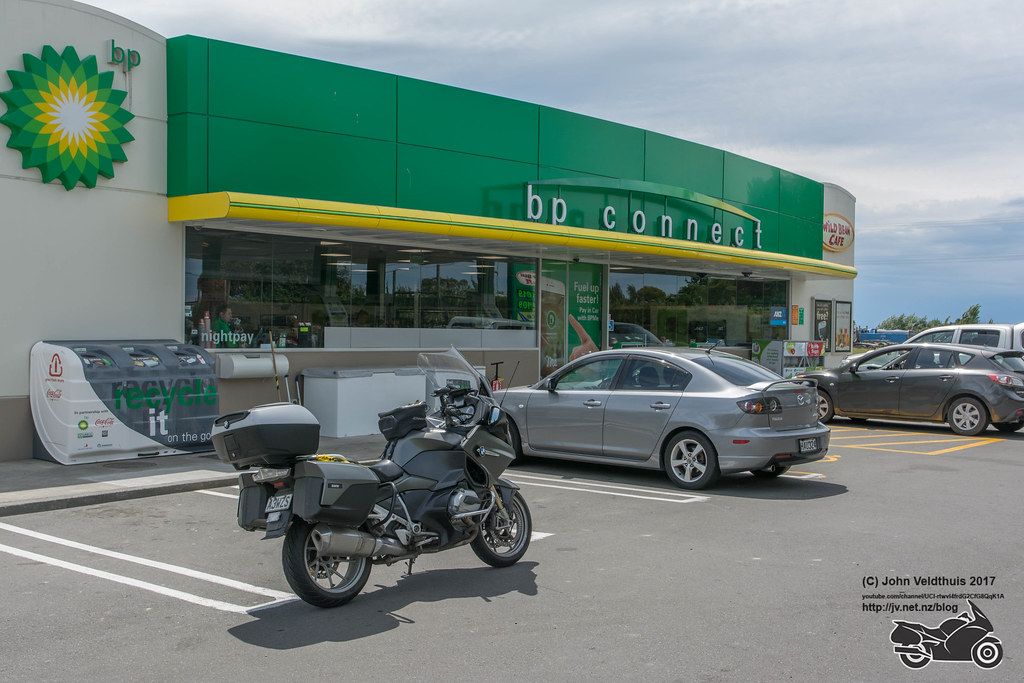 Bayview BP snap taken, and I went just down the road to the Mobil station and as the tank was still ½ full of 98 got 20 cents a litre off some 91. Next stop was Skyline sign in Rotorua and weather report was crap for this area. Headed along the Napier-Taupo highway and heaps more police seen many who had someone pulled over. As predicted the weather took a turn again and about 15 minutes out I had to pull over and put the rain suit on yet again. It was still wet from the morning so not the nicest. Rain hammered down as I entered Rotorua and again pulled into a Mobil station to top off for the last time on the trip. At the Skyline sign which was checkpoint number 5 the rain eased a bit, so I grabbed the chance and took the photo. 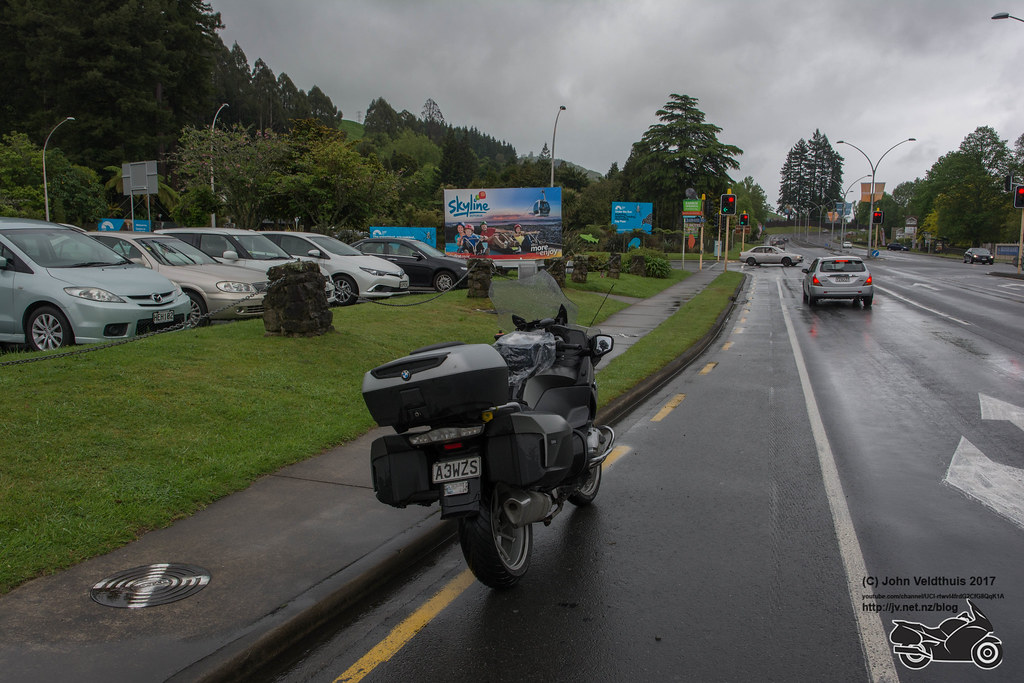 Next checkpoint was the Kaimai Air Crash memorial. This involved continuing up SH5 and then a right turn onto SH28. Still more coppers out and just before the turn off to SH28 a copper had someone pulled over giving him a ticket. No doubt going 5k over the limit and gathering more revenue. Rounded the corner after this and there was a huge amount of what looked like crash debris on the road. There was a couple of hub caps and when I got closer saw it was rocks and dirt. There was this huge pothole in the road that could have swallowed a mini if it ran over it. Just past there was three cars pulled over and all three had blown tires on at least one tire with one having both blown. Useless bloody copper should have been there warning people and doing something about it. Turned the corner to SH28 and there were about four more cars again with blown tires. One was on a trailer and another has both tires blown as well. 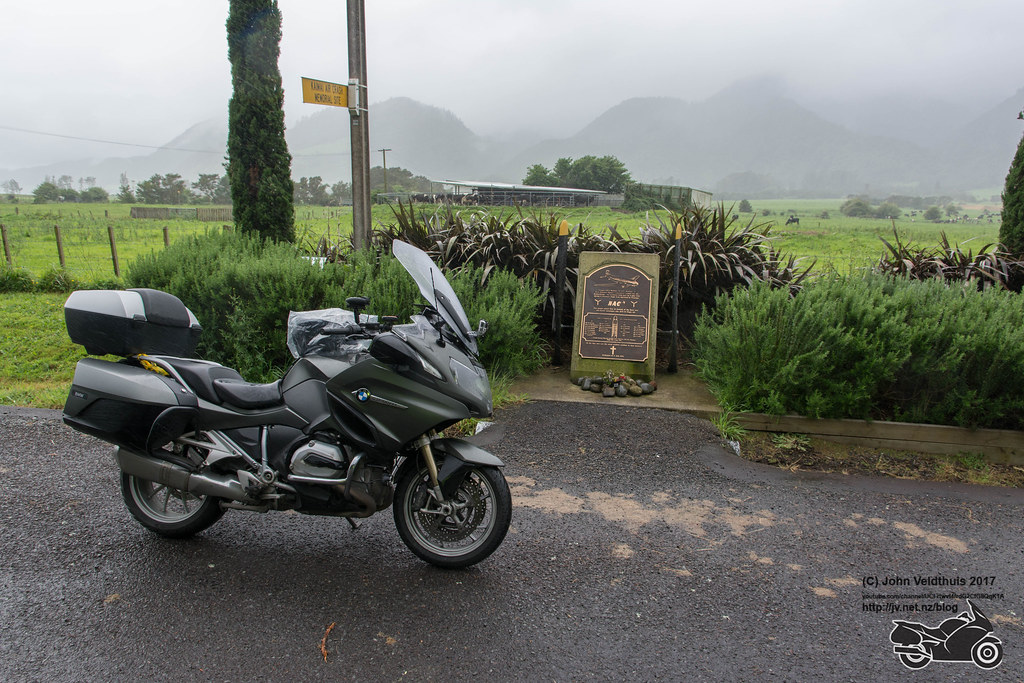 Continued on as there was nothing I could do for them and turned onto Old Te Aroha road. For an “Old” road this one in in perfect condition. No pot holes, no tar bleeding through and heaps of 65kph corners. Would have been awesome in the dry but was good in the wet. The Crash memorial came up and I took the photo. Would have stayed a bit longer but the rain was coming down again. 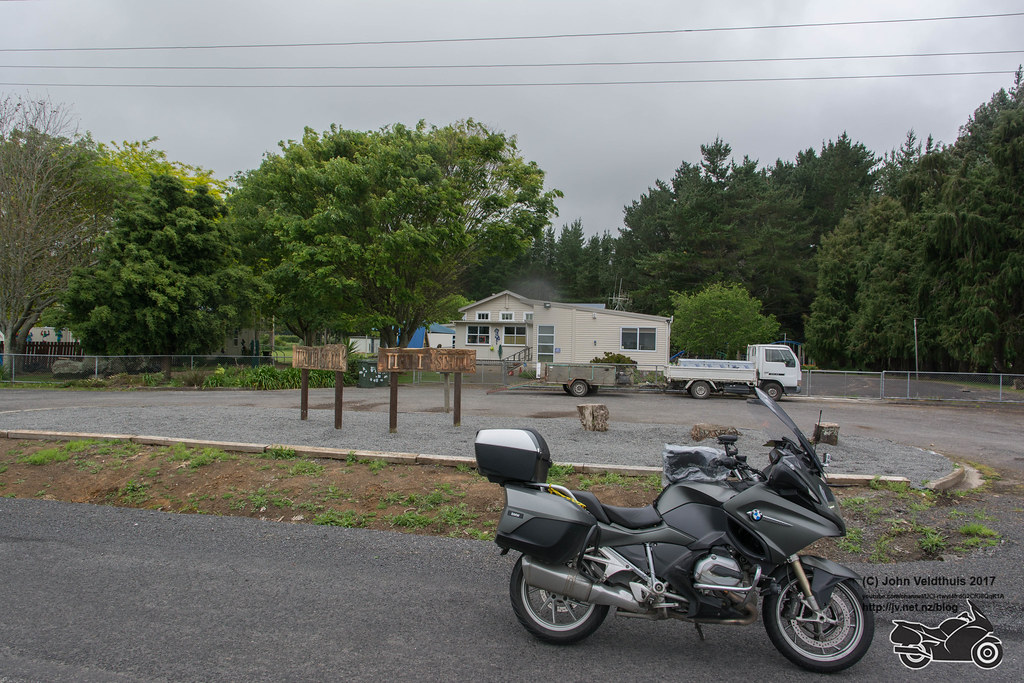 Continued along the road and through Te Aroha to Tirohia School for checkpoint number 7. Quick ride to the final checkpoint of Te Hoe home kills and I was on my way back to Hamilton. Weather had changed again and was nice and sunny again. As I entered Hamilton could see more blue flashing lights ahead. This turned out to be an accident and as I passed there was a bike up against a fence and it looked like one of the guys I had been following but I did not see the yellow tape we all had, and He arrived just minutes after I did. I arrived back at 5:22pm 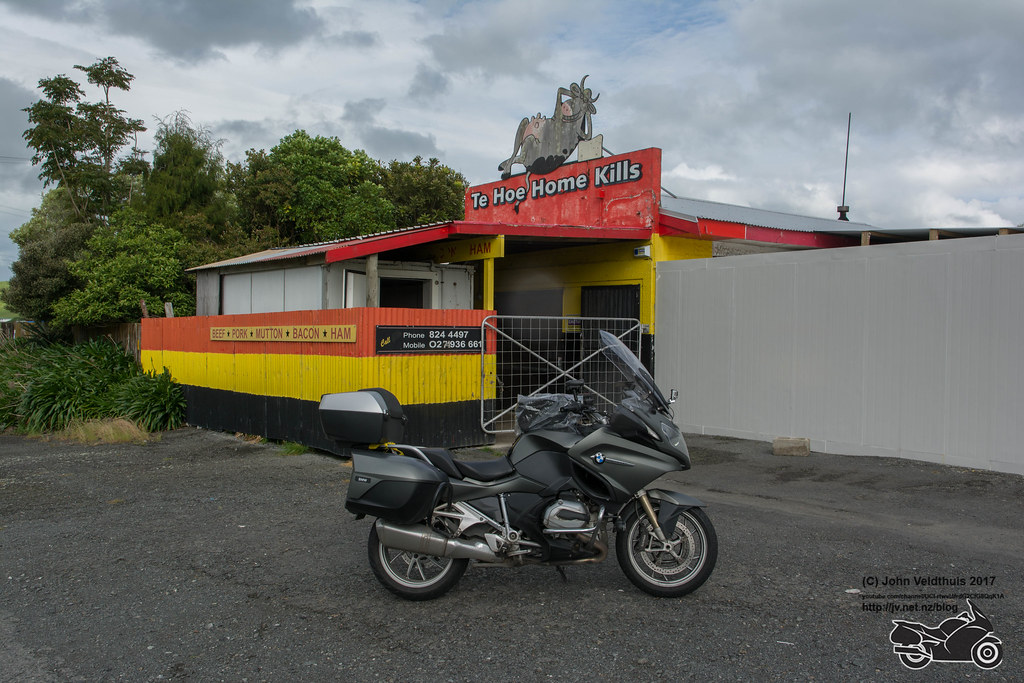 Turns out I was the first one back for the second year running. Unusual because I don’t really go that fast, but I do keep my speed up through the corner and such. The second one arrived as I stripped off my rain suit and we went in at the same time.

The spot track of my ride is below. This includes the ride up to Hamilton and back home again.