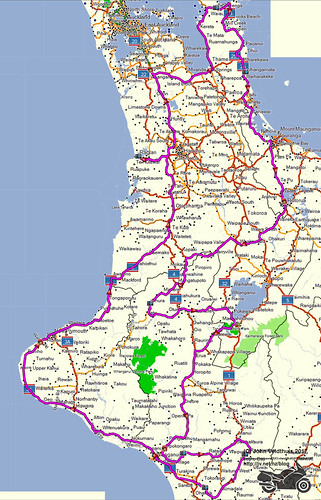 Had wanted to plan the night before but no details released. When I asked about it they said quite a few said all they were doing was giving the route to the cops. Well didn’t seem to make much difference as I saw heaps more this year than last year and the trusty detector alerted me in time on at least five occasions all between Bombay and Thames.

So first job was to enter the checkpoints into my laptop and generated the route. Couple of shaping points needed and all was go. Trouble was the route wouldn’t import into the GPS. Maps in the laptop were older so some incompatibility there. Checkpoints were there so all good. Now to wait for 1pm.

And away. From the Turangi start we headed back down the Paraparas to head to Upokongaro and the maned checkpoint as the Avoca Hotel. Paraparas in poor state with lots of one way areas and three sets of lights. Still good time made. 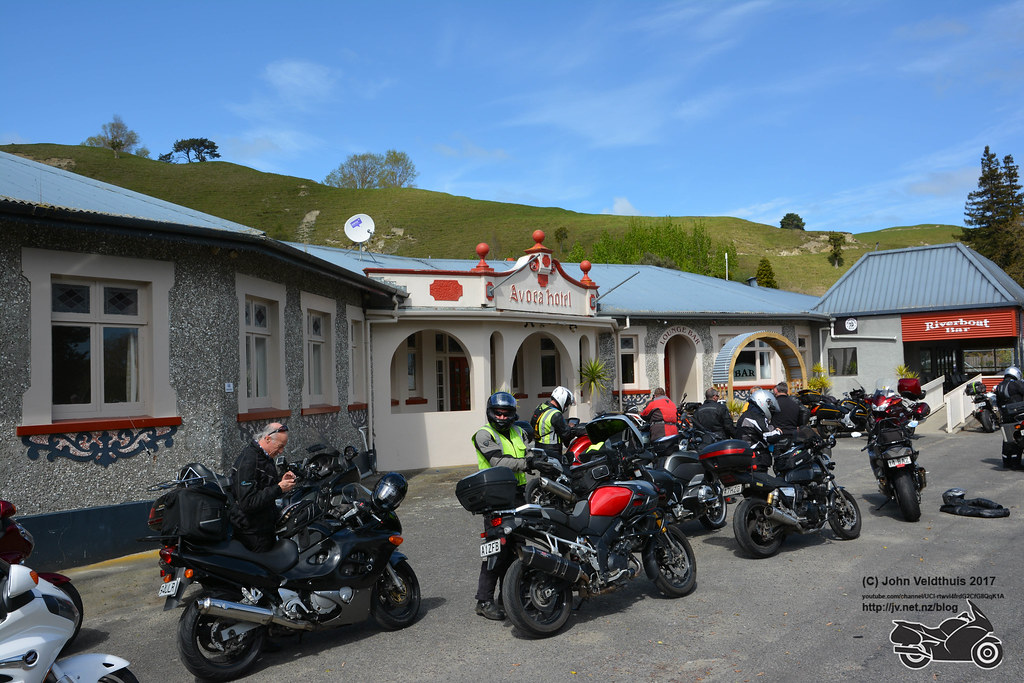 Next it was left on Kaimatira road and heading for the bridge at Mangamahu Road. Nice clean ride so far. 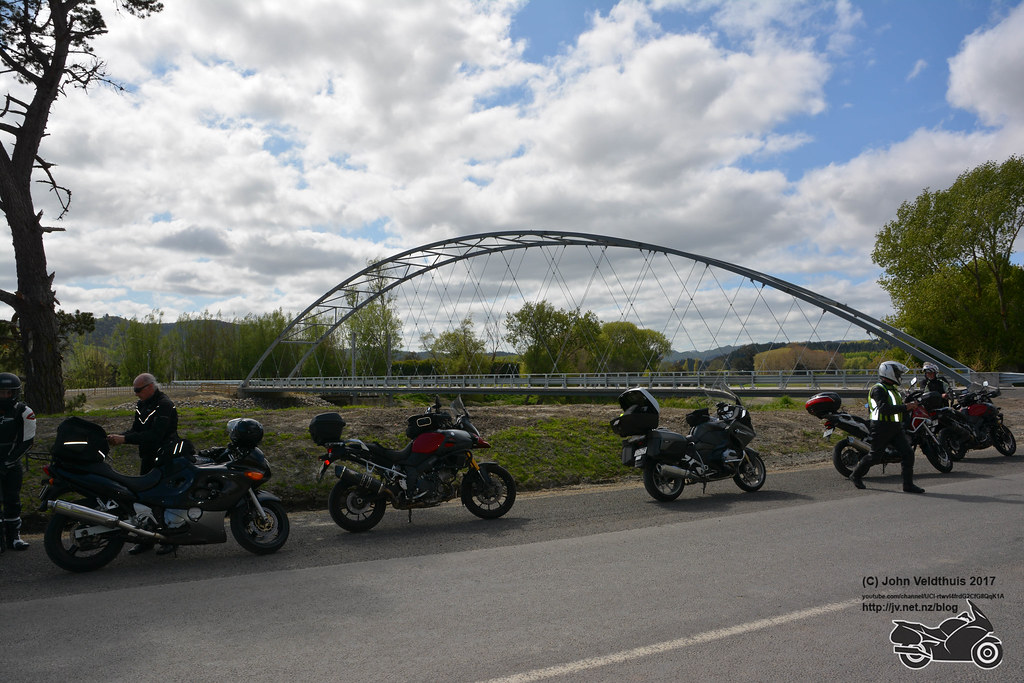 Next on the list was Pemberton Corner. The GPS said to do a U-turn but I knew it should have been carry on straight. Maybe the GPS knew something I didn’t. Anyway carried straight on and after about 5 times telling me to u-turn it decided to play ball. Anyway a little further on came to a corner and took it normally to find a group of bikes parked up. One bike low sided into the fence and the guy in front of me low siding as well. The cause of all this misery was a large pile of gravel all over the road ¾ of the way through the corner. Knew if I used the front brake I would follow then so stomped on the rear until I had the bike upright and straight and then used the front stopping just short of the bike on the ground. Someone went back to warn the coming riders while we got the bike out of the fence. Looked to be just minor damage and both bikes started okay in the end. 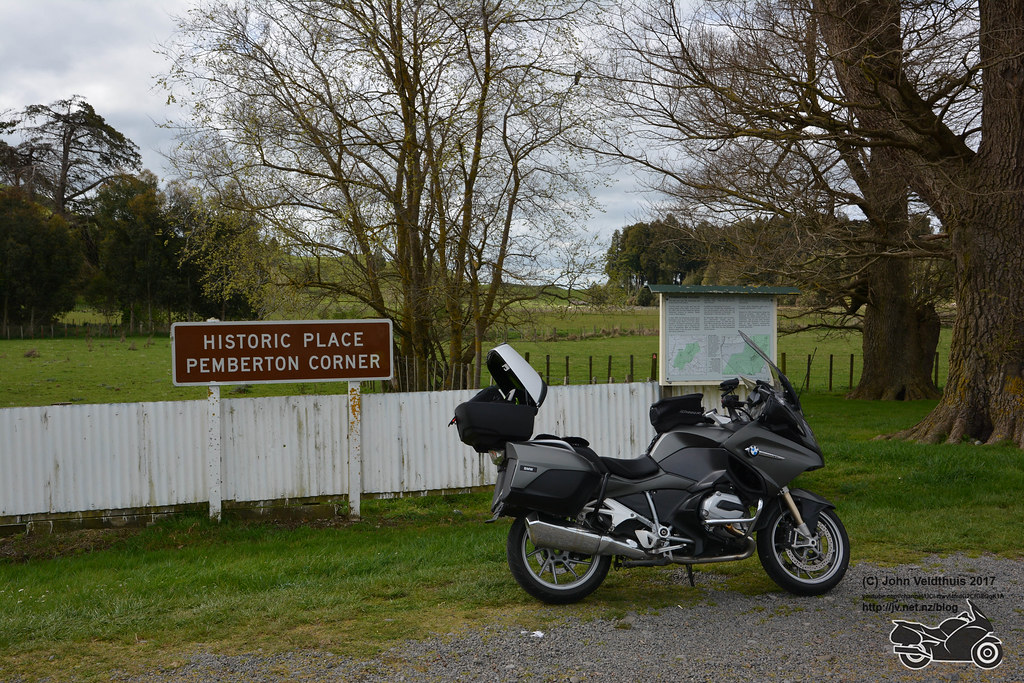 Photo at Pemberton taken and then onto Halcombe to take a photo of the memorial. Someone offed to take my picture here. 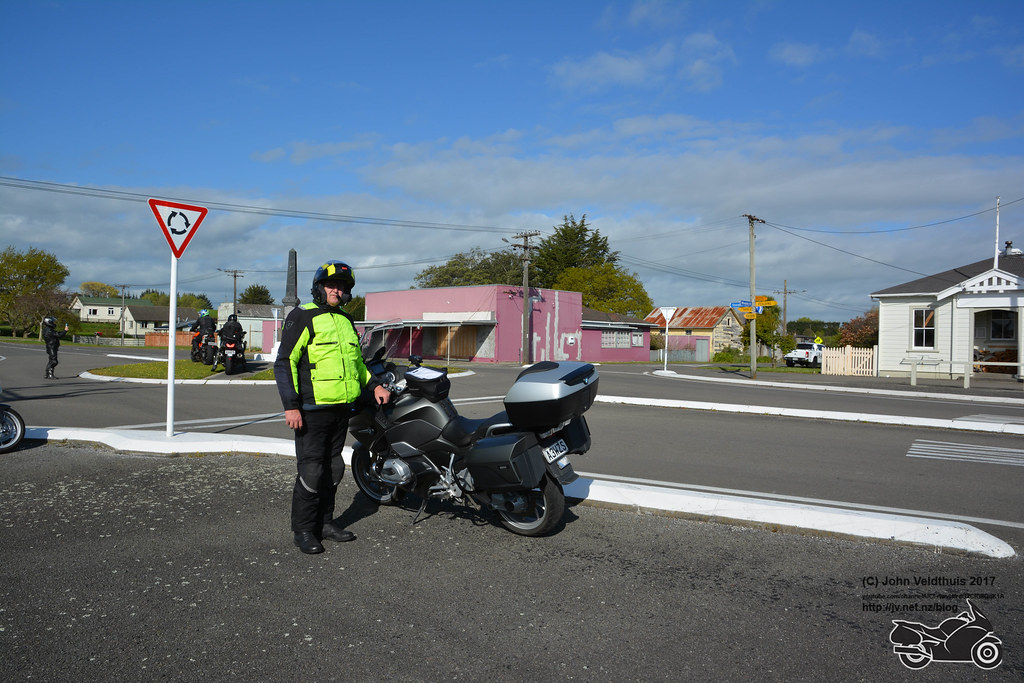 Next was off to the Naki and Oakura. Stopped in Hawera at macca’s for a quick feed and then past home at Manaia. Decided to call in and drop off the laptop saving a bit of weight. Checked in at Oakura as this was a manned check point and then off to Raglan. 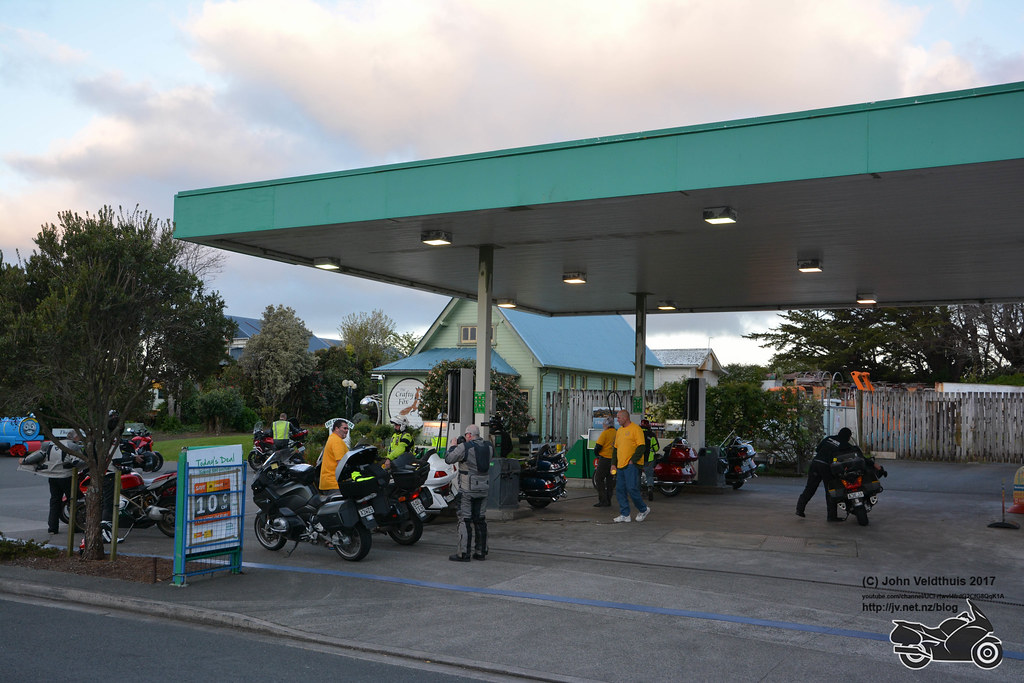 Nice ride to Raglan and made up a bit of time and it was dark going through Mokau. Got to Raglan and took the picture and next was Bombay. 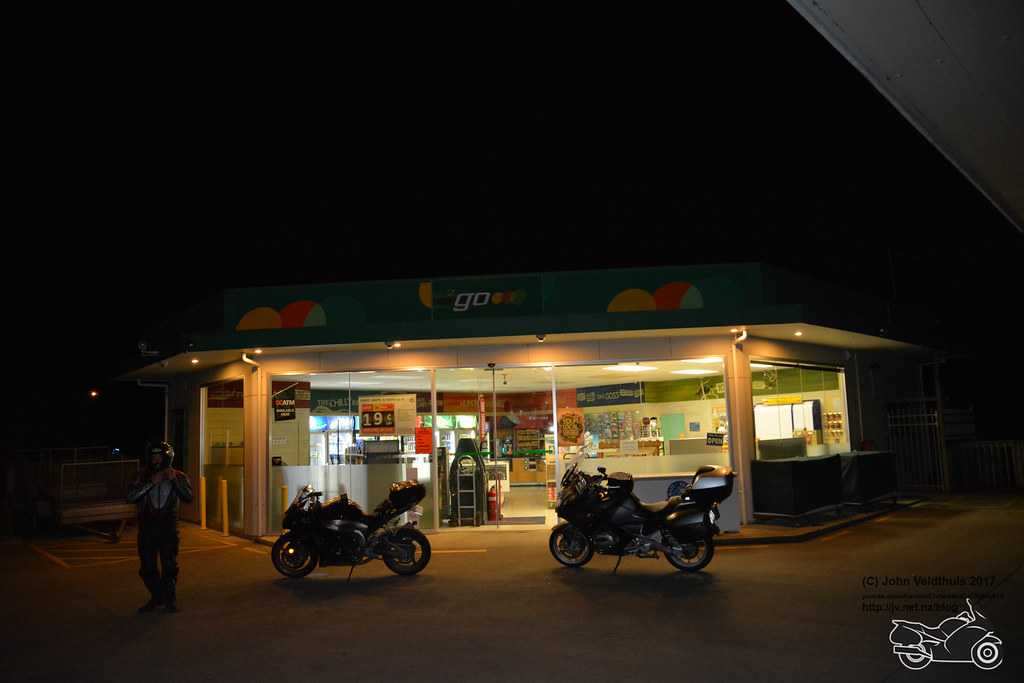 Decided to go back SH1 rather than the short route due to the new seal we told about. Nice to sit on a straight bit of road and relax for a bit. Another manned check point and then off to Te Rerenga via the Coromandel Loop. This is where all the cops were. Five detected by the detector and two others decided to pull out in front of me and travel with me. The Coro Loop in the dark was certainly different. No traffic but couldn’t really judge to corners well enough. Photo taken and off to Whangamata. 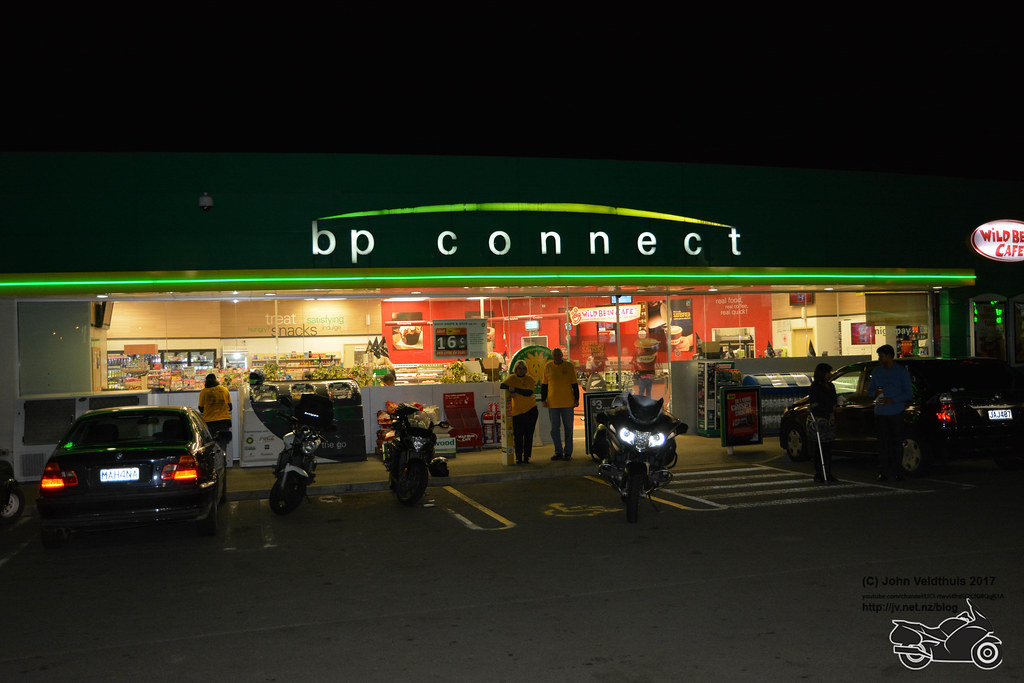 Was starting to sick of the twistys by the time I got to Whangamata as could not get any real speed up and the average dropped off from 97km/h to 91km/h in a short time. 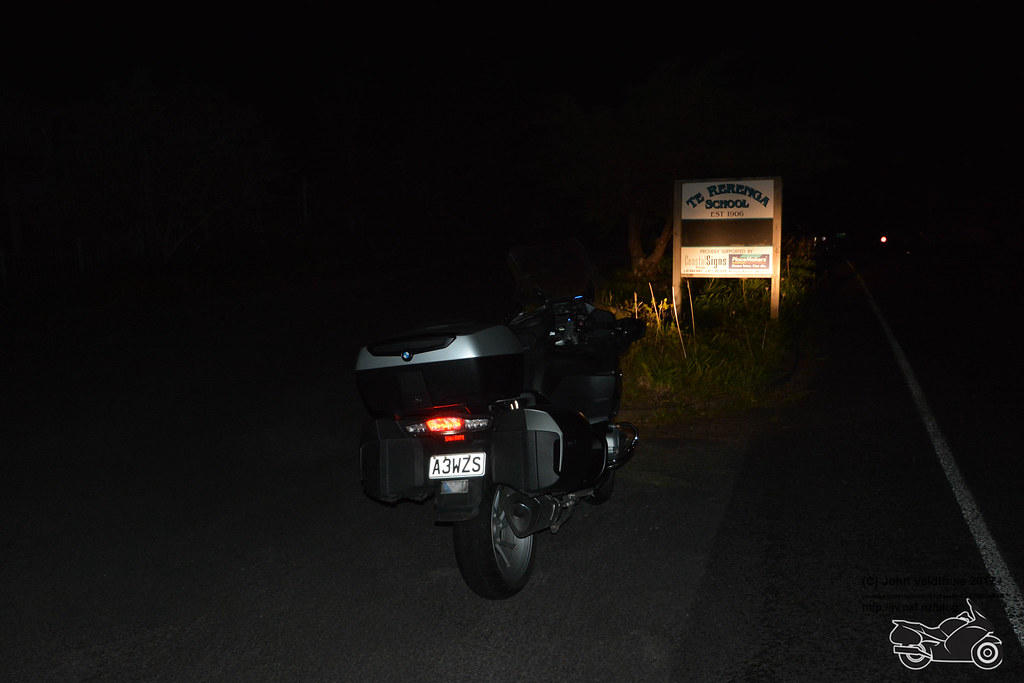 Photo taken and off to Rotovegas. Pretty boring ride down here but it was starting to get cold. Weather was play nice and only a slight sprinkle between Bombay and Thames so far. Stopped and put the heated vest on. Seat heater and heated handle bars already on. Much more comfortable. Manned check point so checked in and photo taken. I was lucky number 12 at this point so doing okay. 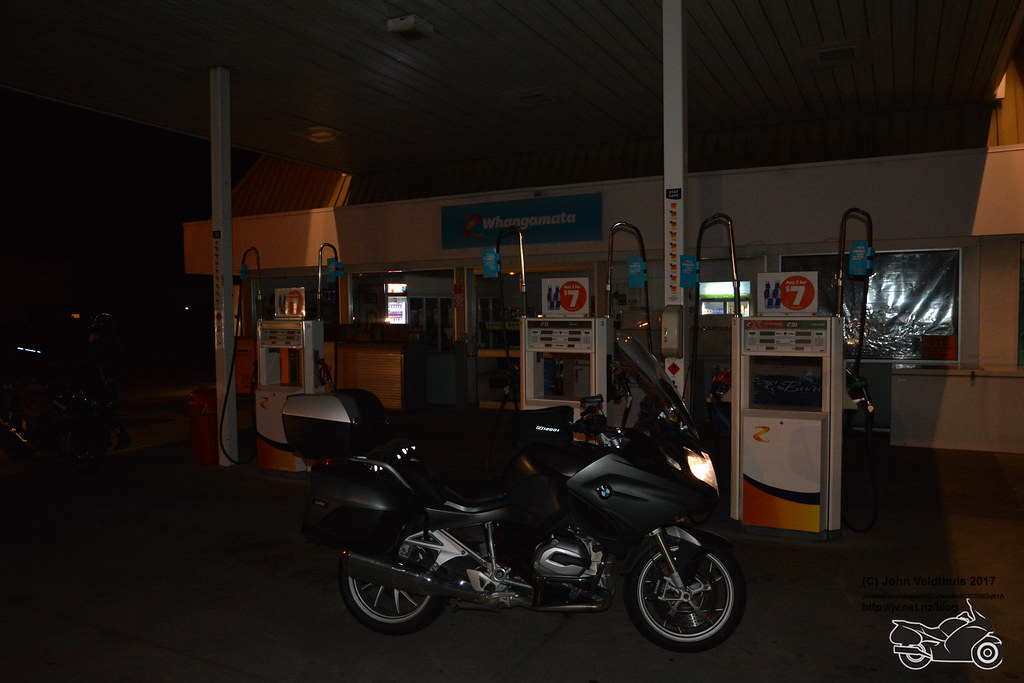 Next on the list was the final check point of Ohura. Now thought the GPS was going to get this wrong as it was pointed out that one road existed on the GPS but was not actually there. I routed this on the laptop but as it would not transfer I would have to do it from memory.

Was starting to get tired by this time and twice I had to stop and close my eyes for a few minutes. The temperature was also dropping and eventually got down to -1 around the top of Taupo on SH1. Had to put an inner glove on because the heaters couldn’t get enough heat to keep up. On one of the stops a couple of others came past so decided to tag onto them for the last parts. On the way through Waimiha road my right hand was getting very sore from the constant brake use. Finally there and back in daylight and took the photo at Ohura of the memorial hall. 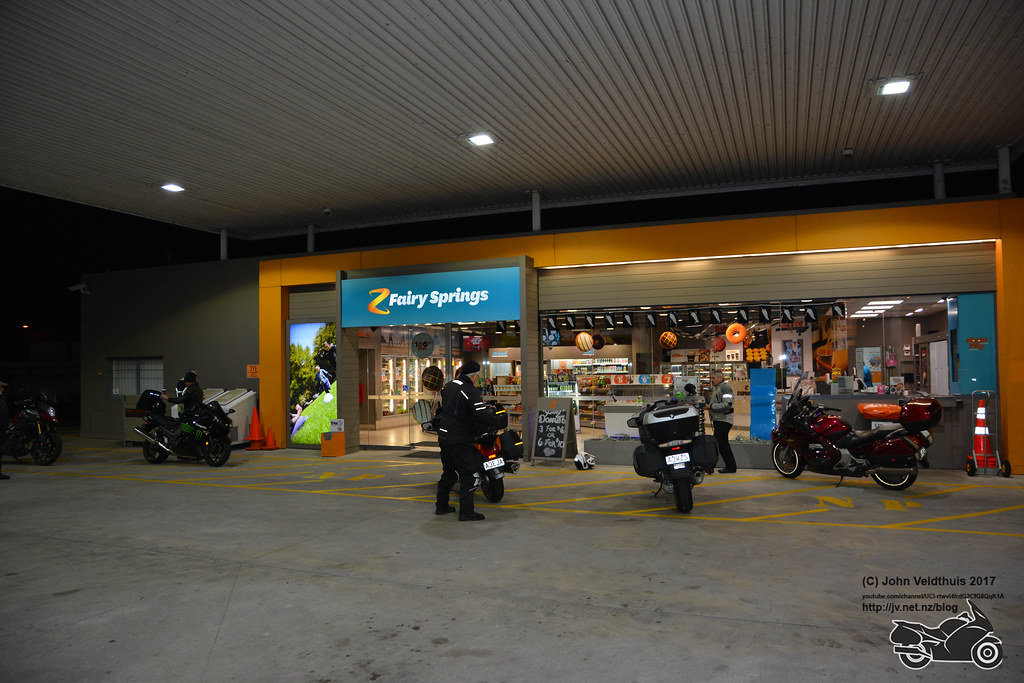 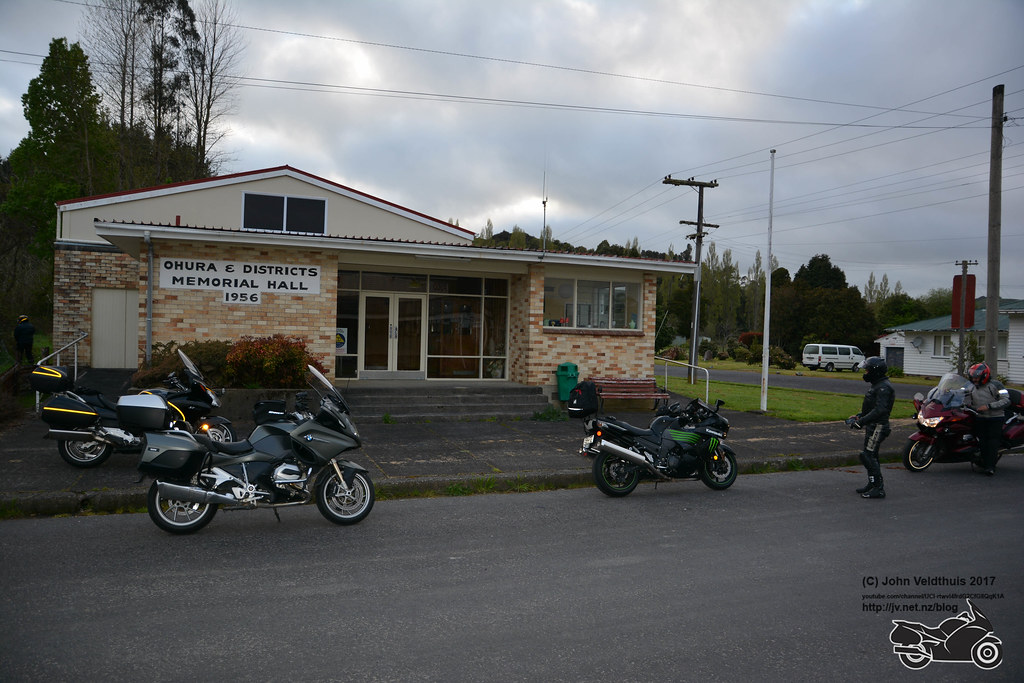 Again I knew I had to carry on straight but the GPS said U-turn. I ignore it and carry on straight down to the forgotten highway and up to Tamaranui and over to Taurangi to finish just on 9am. 20 hours in the seat so far. Photos checked and the finisher pack was mine.

Decided to go straight home and arrived at 1pm making it a total of 24 hours on the bike and the butt was letting me know about it.

Very nice ride and many thanks to the organisers and especially all the volunteers at the checkpoints for giving their time with which the ride would not exist. The BMW handled everything well and seemed to get better as the ride went on.