The Hamilton 1KC ride happened on the 5th November 2016 and was eagerly awaited. The rough route was put out shortly after it was announced so I put it into Basecamp to see what it looked like. Not bad with mostly main roads although a big stretch down SH2 at 80km was not too hot. Might look to bypass that on the day. The briefing arrived on the 29th October and I went on Google maps to get the exact GPS coordinates for each of the nine photo stops. Took about 45 minutes and I had the plan all set out. Had two routes in and one of those avoided most of SH2 (which is for Aucklanders who can’t drive). I will choose on the day which one to take. 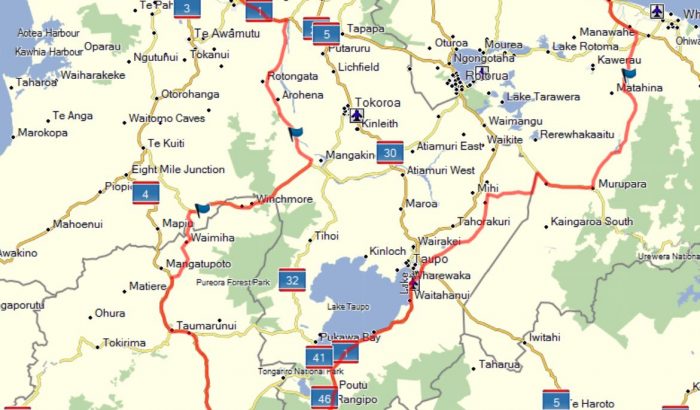 I was on night shift the day before the ride so decided to have an early night. Had fish & chips for lunch/dinner at around 1pm and then at 2:30 hit the bed. Woke up about 5pm and I was feeling sick as a dog. Got out and had a bit of ice cream to help settle things down and went back to bed hoping all would be okay in the morning. Guy Fawkes of course then started early and kept getting woken up by things going bang in the night.

November 5th arrived and I was up at 1am to have breakfast but still not feeling too good I just had some wetbix instead of the fried eggs I had planned. Was off at about 1:30pm as it is about a 3.5-hour ride from the Naki but wanted to make sure I had plenty of time up my sleeve. Leaving Hamilton was to be from 6:30 to 7:00am and I wanted to go early due to the long ride home after. Basecamp said it would take me about 12 hours to complete the ride so that would get me home around 10 to 11pm.

The weather was not great and stayed the same for the whole day. Rain/Showers/Sun. The only thing that was consistent was the wind which at least dried everything out quickly. Arrived at the starting point of Ruakura Campus Club in Hamilton. Took a bit of finding the exact location but soon did. Got the intro and was off at 6:15am which was excellent. There were several riders leaving just as I arrived. Plugged in the ride on the GPS and it said I would be back by 16:42 which I thought was rather fast and it must have known something I didn’t. More on that later.

First checkpoint was out towards Raglan but first I stopped at maccers for a bacon & egg mcmuffin and orange juice to quell the tummy. Soon on the way and it was a nice ride out to Ohautira road to take a picture of a “shed thingy”. Several bikes pulled up as I was waiting for the GPS on my camera to warm up. Picture duly taken and I was off to the next stop. 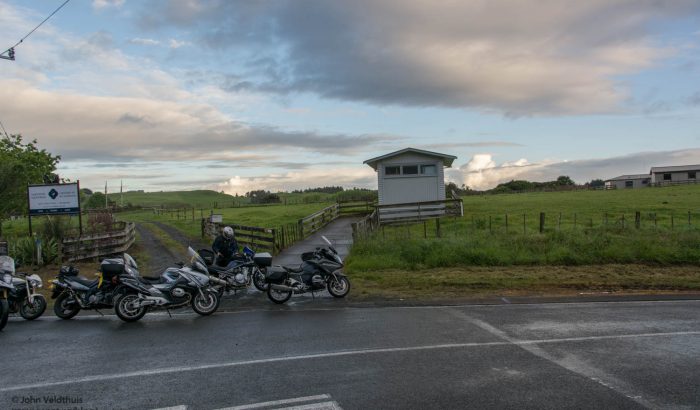 Next was Glen Aton and a picture in front of bus shelter and post boxes. I decided to change my visor at this point to a mirrored one. Change was easy and started to ride away and pulled the visor down and could see a thing. Had left the protective cover on the anti-fog. Stopped and took this off. Even after it was a bit too dark for it and decided at the next stop to change it back to the clear. It would need to be a sunny day for it to be any good. 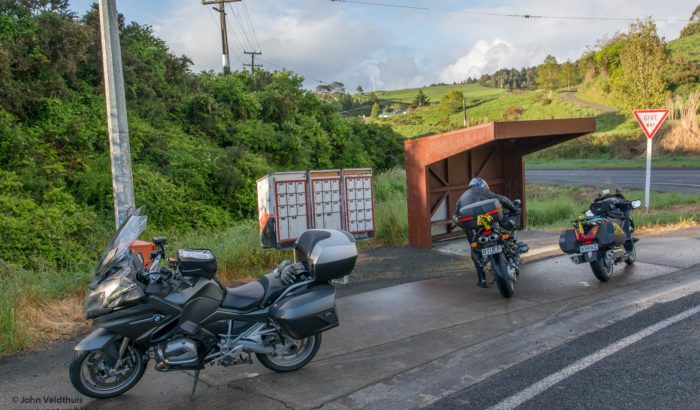 Next stop was Mangatangi Fire Station and a few were already leaving as I pulled up. Shot taken and back on the bike after changing the visor. 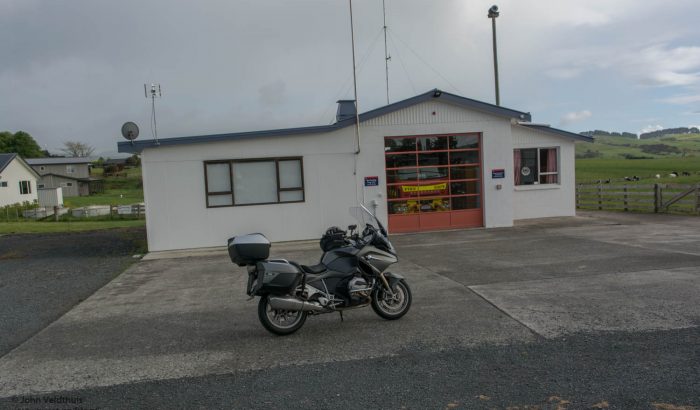 Kopurahi School was the next stop and nothing out of the ordinary. Roads to this point were good but later it would not last. Photo taken and left Daniel filling his bike so he could get to Roto-Vegas. 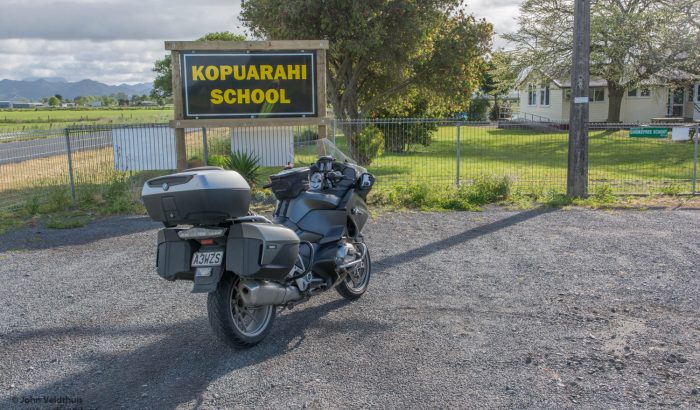 Matahina Dam was next on the list. I decided to go down SH2 through Tauranga and down. The KarangaHake gorge was excellent with few vehicles and nice flowing corners. Loved it. Refilled the bike at Tauranga and left down SH2. The GPS was going to take me down the toll road but I don’t like paying extra for something my petrol money probably already paid for so took the old SH2. Bad move! They are in the process of upgrading it and the road was dug up for what seemed forever. Thought I must have lost about 20 minutes before we got on seal again.

Now this is where my GPS new something I didn’t and it tried to send me down what looked like a forest road. Two others in front of me turned to go down it and there was a sign that said “entry by permit only”. It was gravel so I just carried on. The GPS recalculated and by not taking that road it added 27 minutes to the ride and it was now showing 17:32 as complete. I had been keeping up with another person in front of me but my l/100km was climbing up so I dropped back to road legal speeds. Matahina dam soon came up and I took my photos. Five others arrived just as I was about to leave. 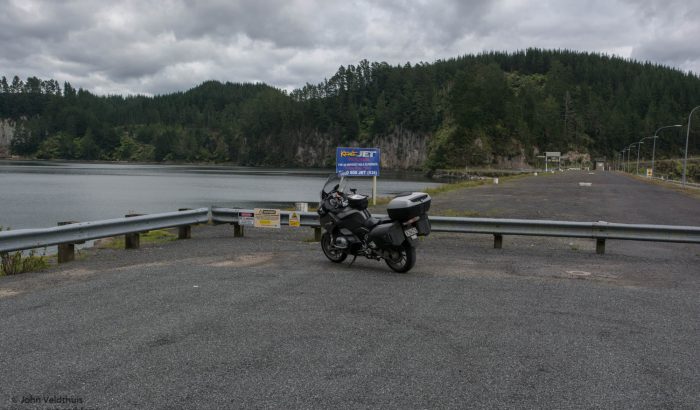 Waiouru was next on the list and the ride was a bit boring at this point unless you count the crashed cars off the side of the desert road. Totally munted and on reasonable straight bits of road. Waiouru still cold came up and photo taken. Filled up the bike for the second and last time on the ride. 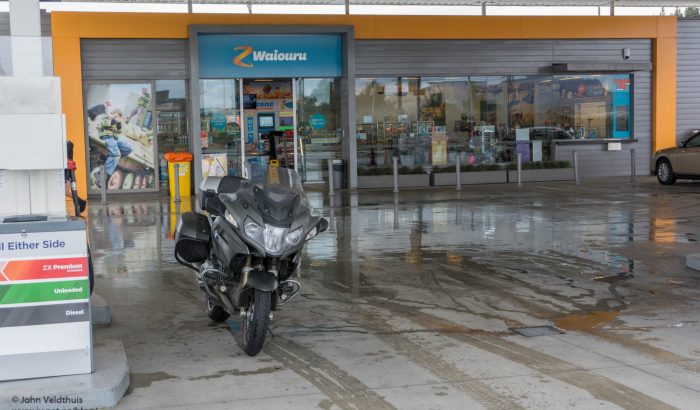 Next stop was on the Parapara highway via Fields track. This road is never the best and this time was no different. More roadworks with a long stretch dug up slowed me again. I always hate roadworks and gravel as that is where I have picked up 5 of my 7 punctures. Okay this time though and picked up the photo of the Kakatahi School. 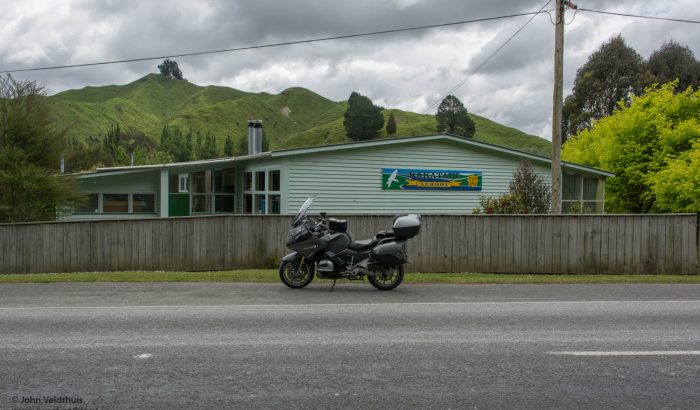 Back up the Parapara’s and onto Bennydale for the next stop. Caught up to a few riders who were doing about 80km/hr and passed them shortly after National park. The road was very wet but no actual rain at this point and I was getting a bit cocky feeling the newish Roadtec 01 tires working nicely. Until one certain corner. I was out wide and had just turned in for the apex when I saw a patch on the road. It did not look like a tar slick or diesel but there was a difference. The front wheel hit and nothing happened and I thought good. Next the rear wheel hit it and let go. It was quite a big slide in the rear but it is amazing how nimble the R1200RT feels even though it is a big heavy big. It did push me wider in the corner than I would have liked but there was still room. I did slow down a little bit more after this. Bennydale came up and photo taken. About 860km done and not far left to ride. 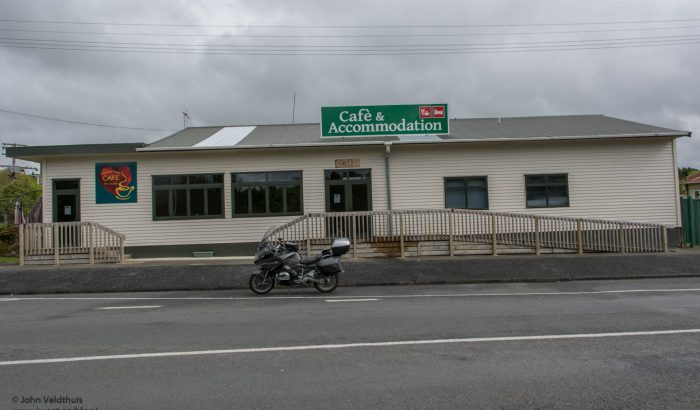 In fact, the next stop would be the last one and it was to be the Waipapa Dam. The GPS took me on some roads I had never ridden before and they were a in good condition. By some of the names of the roads I expected gravel roads but no the GPS was doing well and when I checked back at home it was following the original track I had planned. Got to the dam and it started to rain so it was hard to keep the camera dry and get a photo. Also my head was a bit sore from the helmet so needed a break to get rid of the pain on the ear lobes. Finished the last of my moro bar and headed for the finish at the Ruakura Campus club.

I arrived at the club at 17:40 which was 20 minutes ahead my estimate when I left. I stopped quite a lot for various things so not sure where I made up the time. When I pulled up there were plenty of cars and no bikes. Given the number that were ahead of me I expected at least some to be there. Walked in and got a clap of hands and congratulated on being the first to finish. That was a shock as I was not going that fast but certainly was less than the 12 hours I planned at 11.5 hours. Who said that SH2 would be slow and full of Auckland traffic?

Anyway, got my certificate and badge and even though the bar and food was open I decided to leave straight away as I still had a 3.5-hour ride ahead of me to get home which I arrived home at 10pm and a 20-hour day on the bike.

Great kudos to the organisers who put on a great ride again. Can’t wait for next year.

Actual Spot track taken. Includes ride from home and back. 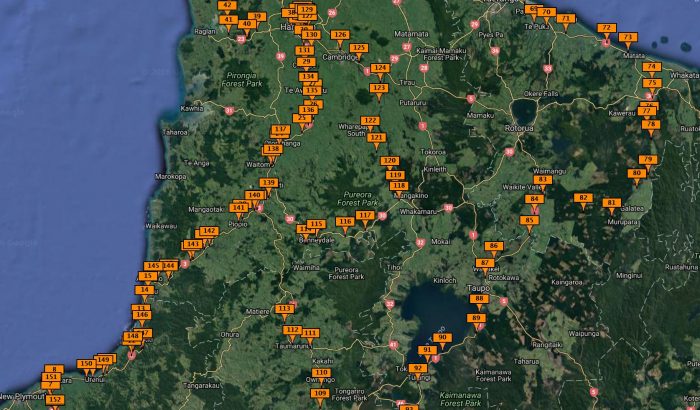