Saturday 7th of October was the day for the 4th running of the NI1600 (North Island 1600km  in 24 hours) motorbike ride. However, the week leading up to this wasn’t good for me.

The Saturday before this I went on a Jetski ride down the Patea river to the dam. It was a good ride until about ½ way down when I was following two skis and suddenly their wakes joined and my ski first went one way and then the other and for the first time ever threw me over the left-hand side into the dirty water at about 65kph. I remember skipping like a stone twice and then wondering which way was up. Found up and my ski and climbed back on. Lost my googles and more importantly my glasses. Found the googles but no glasses. What was worse is that I got very sore after a while and I had also cracked a rib. That was not going to be good for 20 odd hours on a motorbike.

Anyway, Friday night comes and I get the email with the details and plan it out in Basecamp. Had to us a few shaping points as usual but this time it went straight into the GPS. I always have trouble when I use my Surface Pro 4 to try and do it. The PC never has the issue. Leave the next morning around about 7:30am and 15kms later it was raining. Put the rain suit on and it rained all the way from Hawera up to the other side of the Te Ponanga Saddle. Checked in at around 11am and read the notes a bit better. As you can see by the route below it is like a spider’s web with Turangi in the middle. This would be the manned checkpoint for checkpoints 5, 7, and 11. 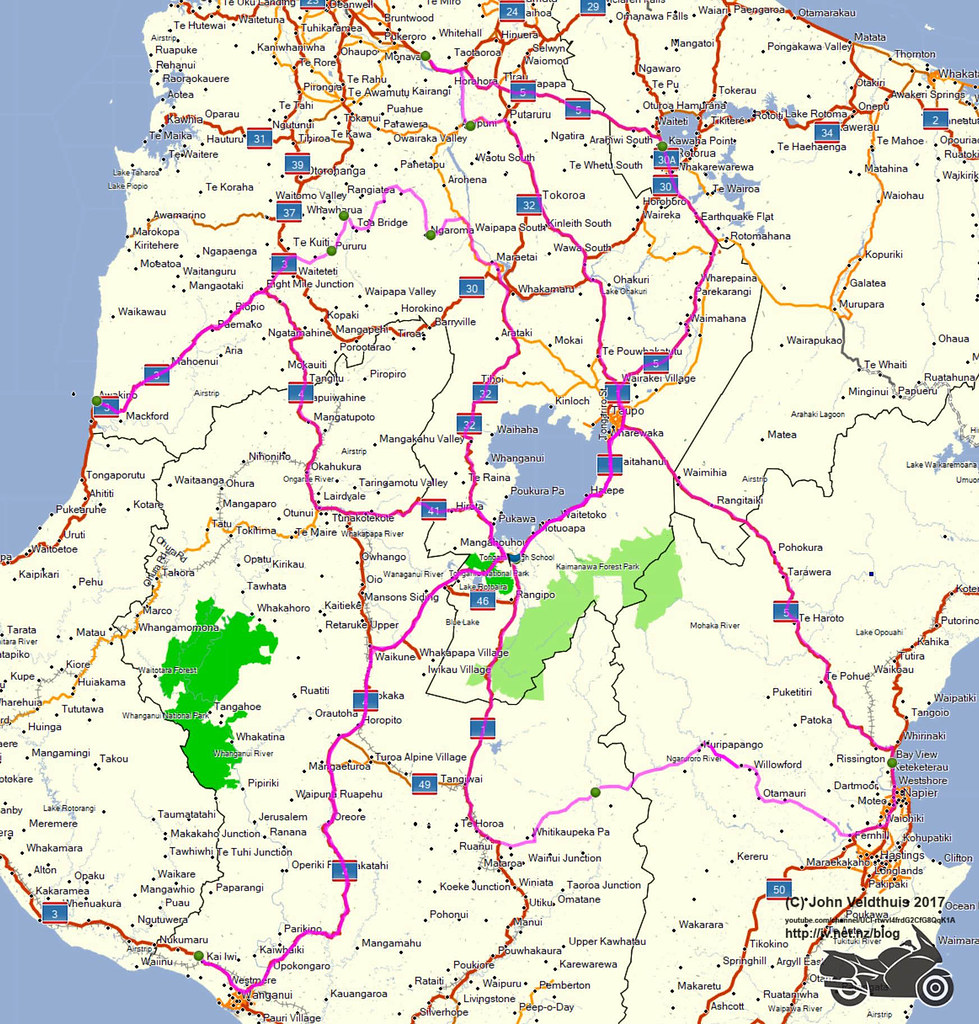 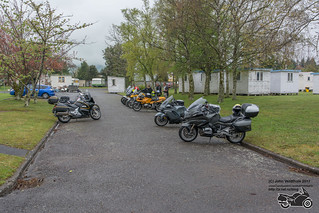 About 90 mins before kickoff 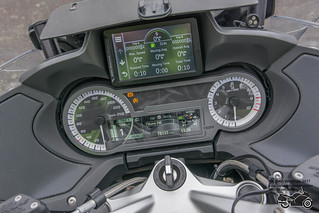 Got to get the start information

1pm came and I put the rain suit back on as doing so usually means it doesn’t rain (yeah right) and we were away. First stop was Ngaroma which required a ride up the left side of Taupo and then a turn onto a side road. My GPS told me this turn was where there was no road so I carried on and as it was recalculating it missed the actual road and I had to do a U-turn and get back on track. I was not the only one to miss this corner though. The road was really nice and better maintained and condition than many of the state highways. However, some kids did run out in front of me and I nearly collected the lot of them (that baby goats not the human kind). First check point and just a few splashes of rain. I did have a new set of Metzeler Roadtec 01 HWM on so the bike did feel safe in the wet. 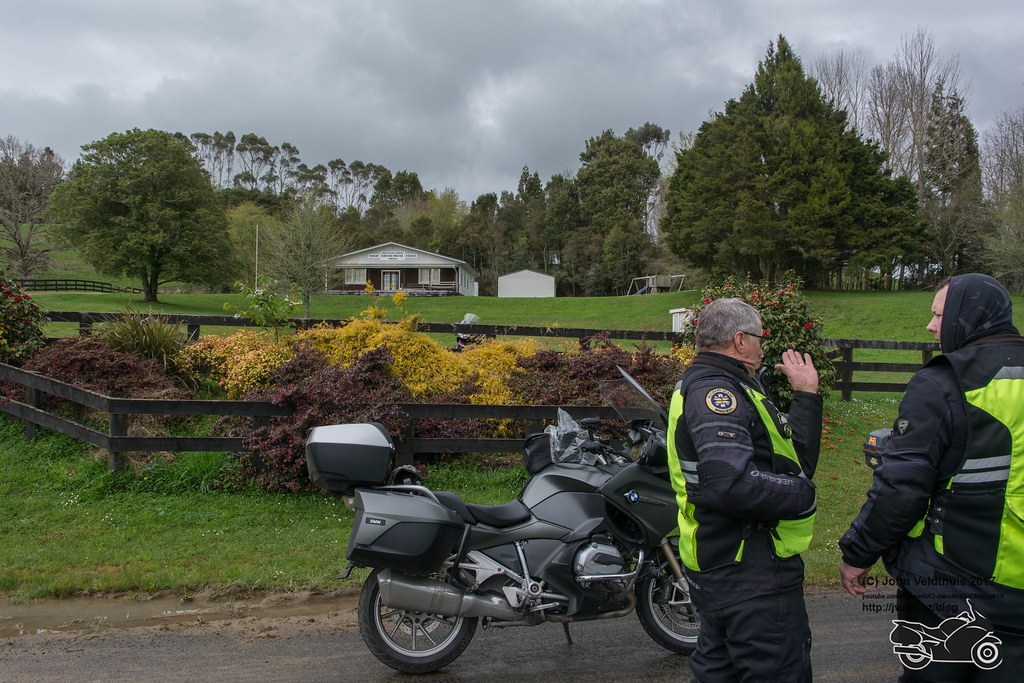 Took the photo and the GPS was then trying to route me back as it thought the road ahead was gravel. Had to listen to “perform a U-turn when able” for some time before it gave up. Second checkpoint was Otohina and was a sign beside the road on a corner. Nice and easy ride so far and no more rain. 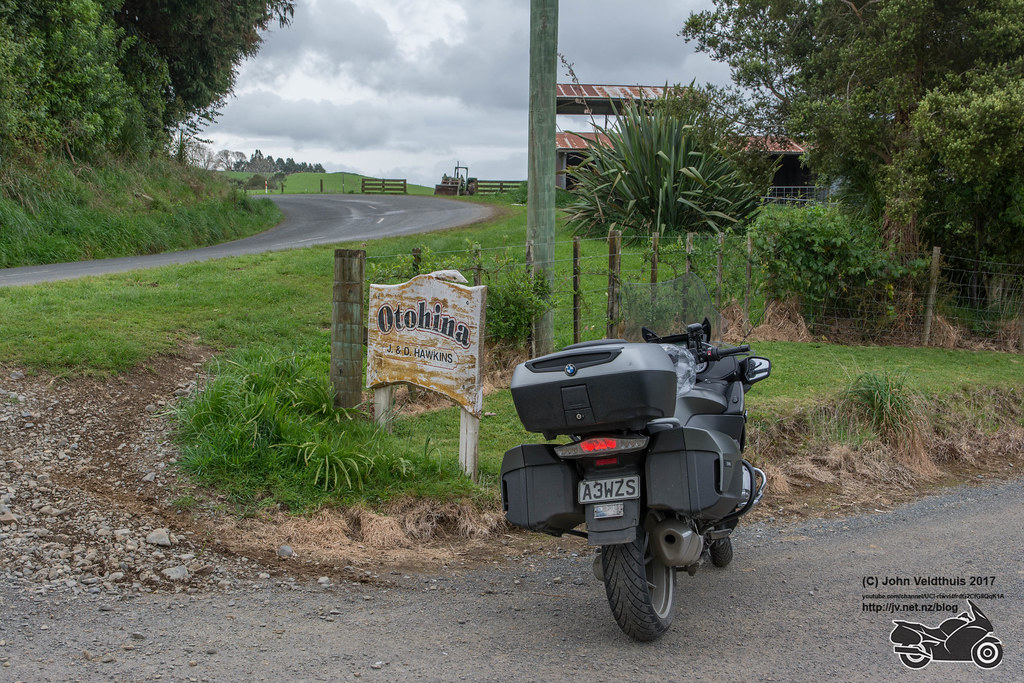 Third checkpoint was Rangitoto and only 11kms from the last one. Not much to do except take the photo and carry on for the next one. 193km done so far. 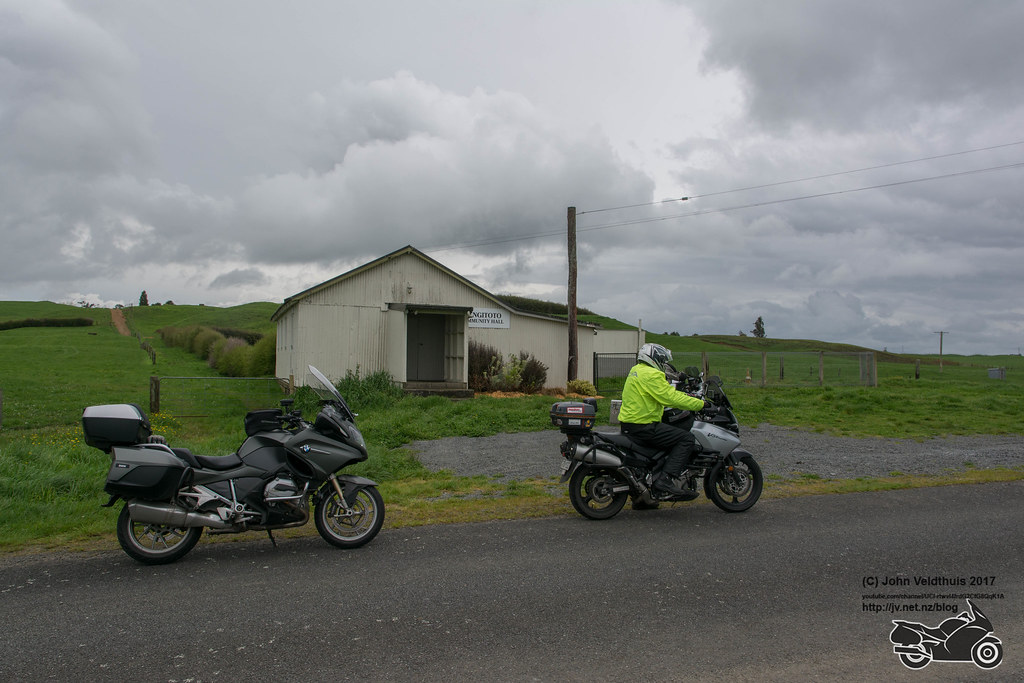 Next checkpoint was Awakino and through Te Kuiti to get there so filled up and took advantage of the cheaper fuel. The Awakino gorge was in a reasonably good state but the wet road did not make for good speeds. Also, a couple of gas trucks in convoy travelling at 80kph were a bit hard to get past. Got the photo and started heading back. Not too much pain so far but that was about to change. 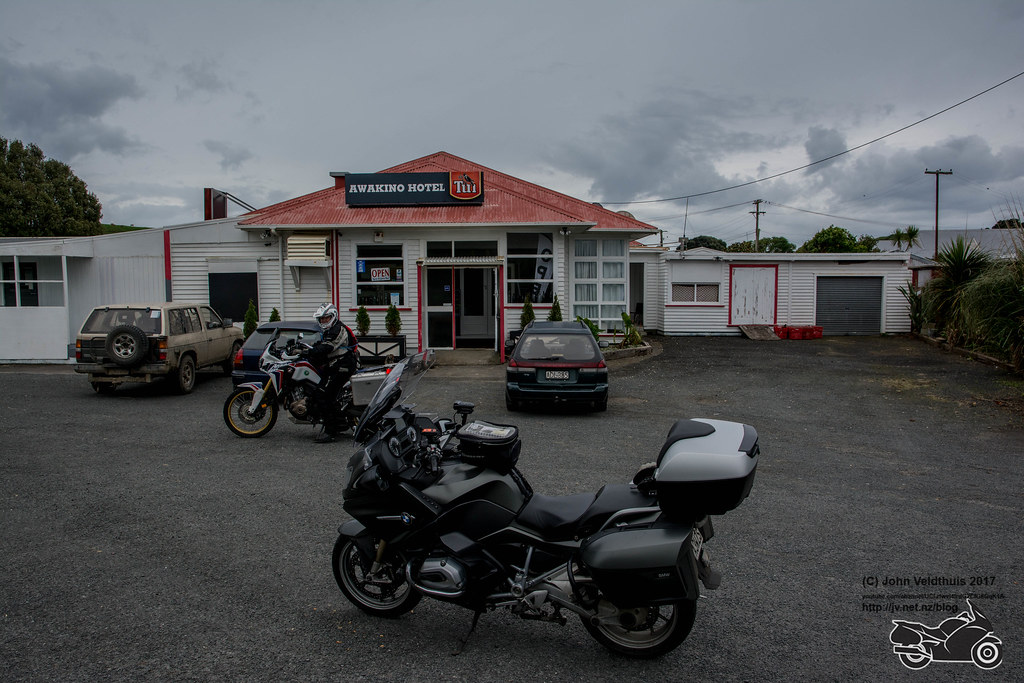 To get back the suggestion was to take Totoro road and head through Aria. However, note said that there was roadworks and 5 of my 7 punctures have happened on roadwork’s so I went to the 8-mile junction in the thought that less windy and don’t have to slow for the roadwork’s even though it was 20km longer. It must have worked because I jumped past a few guys who had passed me earlier. So SH4 all the way to Taumaranui and then SH41 to Turangi for checkpoint 5 which was manned. Refilled, got signed off, took the picture and then had a pie and drink for a bit of energy. It was starting to rain as well. 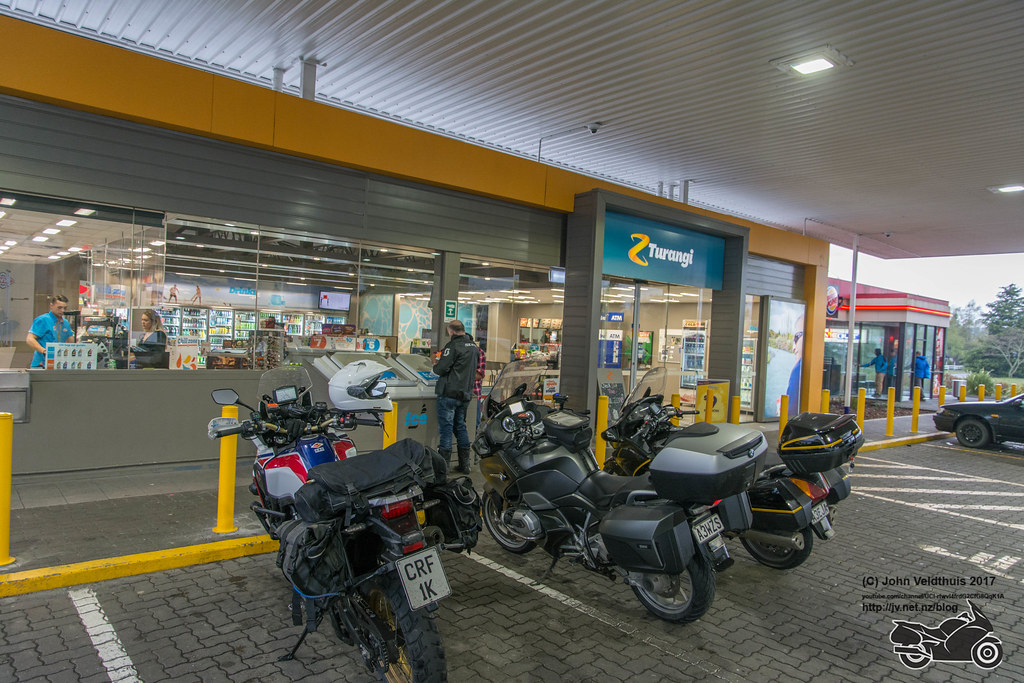 Next was back the way I came in the morning down the Parapara’s and on to Kai iwi for a look at the sign to Bushy park. The road over the saddle was slippery as and foggy as well. Just before the Parapara’s I started seeing bikes coming back. I could not believe that they could be so far ahead of me because I was not going slow. My average moving speed after I pulled out was just on 100kph and these guys were over 2 hours ahead of me. I finally decided they must be the NI800 riders heading back for the finish. More fog through the Parapara’s and all the lights red but I knew they were short bits so just checked it was clear and went through. Made good time down from National park to Wanganui and was soon taking the photo at Kai Iwi. With all the rain and having to use more of the body for the slippery bits my rib was starting to hurt. The rain just kept coming. Refilled in Wanganui for cheapish fuel and back again for the 3rd time through the Parapara’s and back to Z Turangi for checkpoint 7. Got signed off and was told I was number 5 through but forgot the bloody photo as I tried to dry out. My rain suit was not doing a very good job by this stage and my butt was wet. 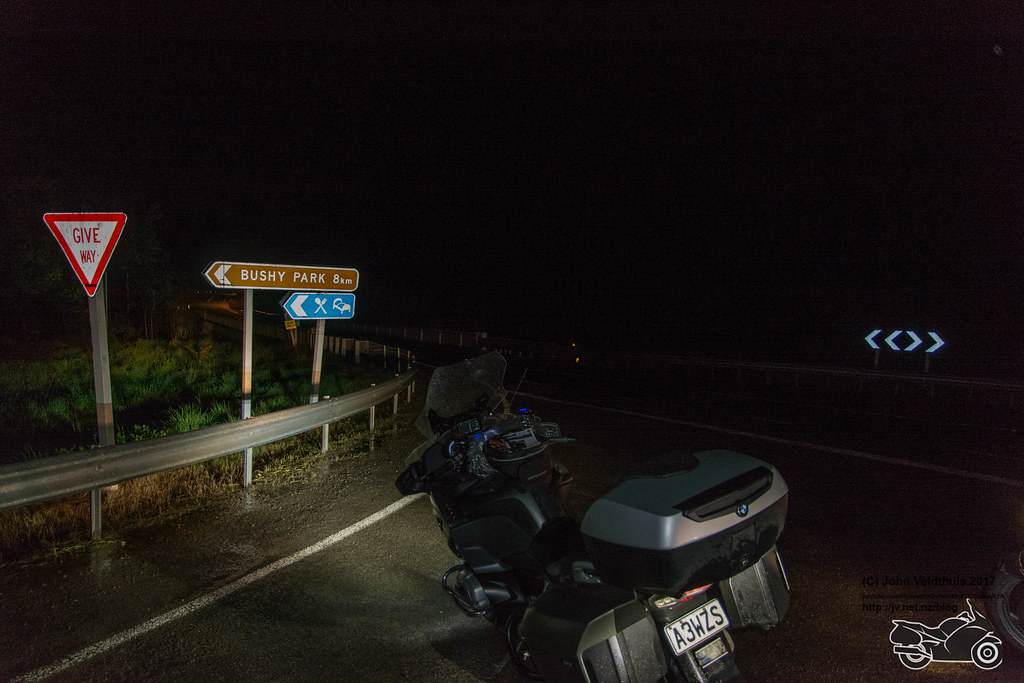 Next stop was Fairy Springs in Rotorua. It was raining constantly now and quite heavy at times. My neck was wet around the helmet as the material soaked up the water. Went in and popped into the carpark to take the photo and a guy drove over and said they were locking the carpark. I said righto as I shot my photo and went out. At this stage I put my foot down at the stop light right onto some slippery paint and nearly dropped the bike. I managed to get it back up before it went over but it nearly killed my rib with the strain of it. 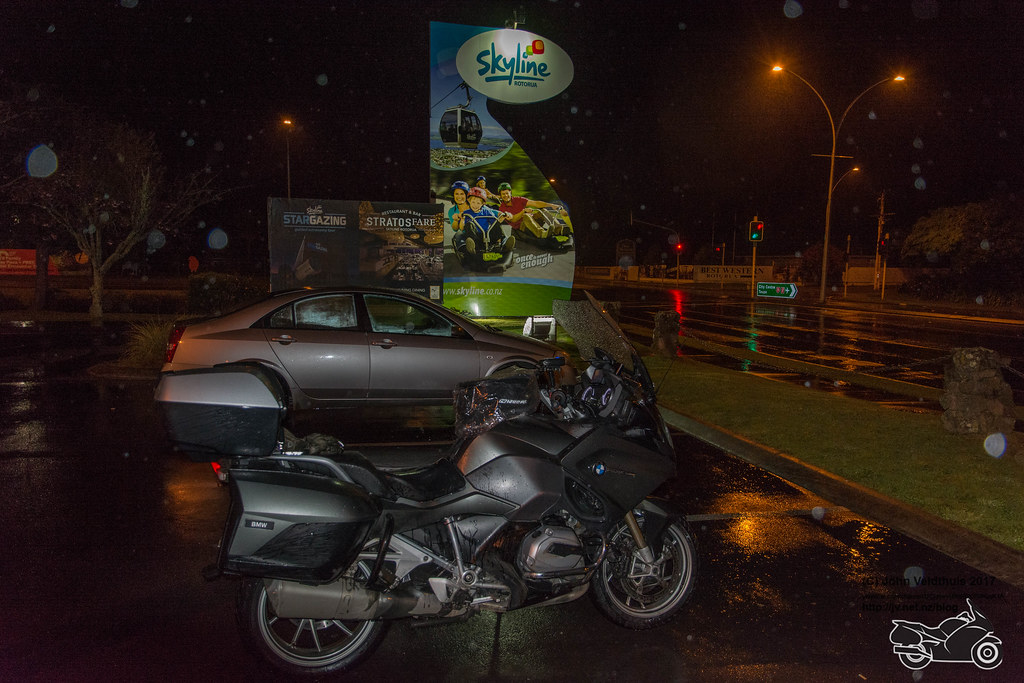 At this point I went and pulled under the veranda of a gas station and had a think. There was at least another 8 hours of riding according to my GPS. I was wet and I was now very sore. If it had been dry I would have most likely carried on but I was starting to get very wet so decided to pull the pin at this stage and headed back for Turangi.

The next checkpoints in order would have been Karpiro Mobil forecourt, Puketurua Hall, Z Turangi, BP Bayview in Napier, and finally the suspension bridge on the Gentle Annie before finishing at the Turangi Cabins.

Arrived at Turangi and was told I was now number 2 but said I had pulled the pin. Was offered accommodation for the night but I was soaking wet at this stage with no dry gear with me (lesson for next time. More rain suits and dry clothes). Refuelled and hit the road for another blast down the Parapara’s. Now this whole I had seen 1 cop on the way up sitting trying to catch speeders at the end of a long straight midway between National park and Raetihi. Well I was closer to Raetihi this time when a car came around the corner at the end of a long straight and did not dip his lights for quite some time. I was just about to flash him when he dipped. Then about 60 seconds later he puts his lights on full beam. Well excuse me, I flashed him with my nice powerful Darla LED lights and he promptly dipped again. He then passed me and in the light, I saw that it was a cop. Good thing he never put his radar on because I was doing at small fraction over the legal limit. I then saw two more in Wanganui. Rest of the trip home was no problem except for the continuous rain and a bloody poor state of the roads. I do know that I did a wheel spin at 120kph in 6th gear at one point. I arrive home at 4:30am totally drenched. Even my Spot device was complaining but I think his battery was low.

Spot track is included here. It is a wonderful tool to track where you have been but it does miss the odd signal. I have mine set for every 5 minutes update.

Next ride is the 1KC and I hope the weather is much better and that my rib is better. Also hope my new glasses arrive soon as the ones I used don’t fit that well in my helmet and added to my issues.