Day None – TT2000 2016 – Planning TT2000 time has come around again and for me planning starts very early. This year like others there are 4 mystery locations to find so I started out trying to find these. Mystery #3 was very easy for me to find and it did not take long with google to find the snow… Read more »

No I didn’t do the Chateau to Plateau today. I would have but did not realise that it was on. For me it was just going to be a final long ride out before the TT2000 in a couple of weeks time. I had decided to go to the Top of the Bruce via Wanganui and the Paraparas. It was overcast when… Read more »

Happy Holidays to all! Hoping you all have happy holidays. Unfortunately I will be working through most of them so won’t be getting out much. Currently at work at the moment but had an awesome lunch of roast chicken, vegies, roast potatoes, and kumara. Followed that by Pavlova, ice cream, and fruit. Can barely move now. Many thanks to the… Read more » 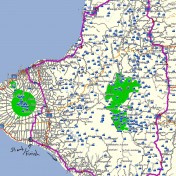 It has been quite a while but finally another ride has made it’s appearance. My days off have all been crappy weather or I had something else to do but finally everything came togeather and I could get away with reasonable weather. My plan was to do a round the block ride basically from home to Wanganui, then Taumaranui, then… Read more »